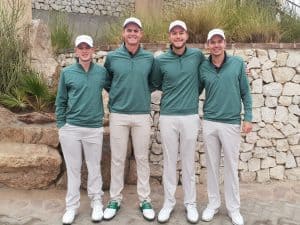 After combining for a team total of 629 in the Stroke Play Seeding, South Africa’s leading four amateurs kept the country’s title defence on track in the Africa Region 5 Golf Tournament in Namibia; credit GolfRSA.

10 April 2019 – The four-man South African team has kept the country’s title defence on track in the Africa Region 5 Golf Tournament with another dominant performance at the Rossmund Desert Golf Course in Namibia on Wednesday.

Ekurhuleni junior Jayden Schaper stretched a two-shot overnight lead in the 54-hole Stroke Play Seeding stage to a five stroke victory on 10 under par with a final round three-under-par 69.

Pierre Pellergrin from Mauritius sealed a fourth place finish on one-under with a round of 72, and Therion Nel from Bloemfontein also navigated the unique desert course in 72 strokes to round out the top five on one-over 217.

“We are very proud of Jayden’s achievement and with the rest of the team’s efforts in the seeding stage that put us in a really strong position to defend the title,” said the team manager.

“The team results determine the ranking for the match play stage on Thursday. The boys combined for a team total of 629. Namibia finished 45 strokes adrift in second, which means we will play the host nation for the first and second places. Mauritius finished third on 678 and Zambia in fourth on 683 and the two nations will face off for third.

“Our weather was infinitely better today. After the morning fog cleared, it warmed up to a sunny 19 degrees. The wind picked up a little again in the early afternoon, but the boys were solid once again, as evidenced by the results. The rest of the Region 5 nations have some way to go to catch up to our standard and I believe GolfRSA has a role to play in this.”

Schaper led the field with rounds of 71 and 66 on day one.

The country’s top ranked junior gave shots back to the field with bogeys at the first and third holes, but steadied the ship with a birdie at the fourth.

“I made a really great birdie from a dead position at the fourth and that got the round going,” said the Ebotse golfer. “I had an eagle chance at the fifth, but the putt lipped out and I tapped in for another birdie to get back to level par.

“I kept it solid over the next four holes, but I made two really bad bogeys from easy positions on 10 and 11. After I let it slip a bit, I got it back with a solid birdie at 12 and another at the par five 15th. And I managed to make one more good stroke for birdie at 17 to put together a decent round.”

Each nation could enter two players in the Longest Drive Competition that followed the official practice round on Monday.

Schaper set the early target with a great drive measuring 299 metres, but he was pipped for glory by big-hitting Nienaber, who bombed his driver into a stiff wind to win with a drive of 312 metres.

“That was a lot of fun, and I have been driving the ball extremely well, but the putter is a different story” said the reigning SA Amateur champion.

“I’ve stopped counting how many putts have lipped out, rushed just past or stopped in the throat of the holes. It’s been very frustrating, but I hope the flat stick comes to the party in the final round, because match play is a different beast.

“You have to be more aggressive to put pressure on your opponent and that means holing putts. Luca and Therion will go out first for us in the foursomes and Jayden and I will back them up in the singles. Our goal is to win all three games to bring the trophy back to South Africa.”