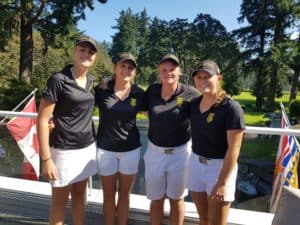 The GolfRSA Protea team grabbed a share of the lead on day two of the 2019 Astor Trophy at Royal Colwood Golf Club in Canada; credit GolfRSA

VICTORIA, Canada (30 August 2019) – The GolfRSA Proteas claimed a share of the lead in the Astor Trophy after an exciting second round tussle against Great Britain & Ireland at the Royal Colwood Golf Club in Victoria on Thursday.

The teams were all square after the foursomes. After narrow losses by Caitlyn Macnab and Kaylah Williams in the afternoon singles, Auburn University student Kaleigh Telfer and 14-year-old Kiera Floyd rallied for a second successive day to win their games.

South Africa finished the day in a three-way tie with New Zealand and Australia.

“It was really an exciting day and all the games were perched on a knife’s edge throughout,” said Womens Golf South Africa President Sally Greasley.

“Great Britain and Ireland (GB&I) are one of the favourites in this year’s quadrennial event and they came into the match nice and fresh after their first round bye. Our attitude was that we had nothing to lose and all to gain. The morning foursomes were tight, but the players were evenly matched and holes were won with birdies.

“Kaleigh and Kiera were 1-up at the turn and won 11 and 12, but the GB&I girls pulled it back with birdies at 14, 15 and 16. Pars at the last two holes meant an all-square result in their foursomes game. Caitlyn and Kiera won the third hole to go 1-up, but then they had an up-and-down tussle with the two GB&I players. Each team won six holes apiece, resulting in another all-square result.”

Telfer was 4 up after 5 holes, but the English player holed some tough birdie putts at seven, nine, 10 and 12 to square the match. The GolfRSA Elite Squad member regained control with a birdie at the testing 13th hole and held on with pars to win 1-up.

“Try as she may, she just couldn’t get ahead and won only three holes against the English player. She was 1-down coming down 18 and her drive was perfect, but it bounced into the thick first cut. Her second shot pitched just past the pin and rolled to the back of the green. Despite a brilliant putt, Lily-May chipped hers close and beat Caitlyn 1-up.

“Kaylah had a challenging start and found herself 3-down after three holes against Emily Toy, but she rallied spectacularly to halve the fourth and win the next three holes. She kept pace with Emily and the pair came down the last hole all square. Both players hit great drives and approach shots, but Kaylah’s ball slipped just off the green at the back. She lagged it to three metres and Emily missed her short putt, but unfortunately Kaylah’s putt to square ringed the hole, giving GB&I a 1-up win.”

It was down to Benoni junior Floyd to get a win to square the match.

Floyd partnered Telfer to victory in the foursomes against Australia on day one and got the better of her singles opponent to take the game 7 & 6. The Ebotse golfer put in another great performance against Olivia Mehaffey from Northern Ireland, who is currently on a golf scholarship at the Arizona State University.

“After the foursomes, I knew I would have to play under-par golf to beat Olivia,” said Floyd.

“She birdied the first, but I squared with a birdie on two and I went 1-up with an eagle at the par five fifth. I just stuck to percentage golf and hitting fairways and greens. I birdied the 10th and she won 11, but I went 3-up with further birdies at 12 and 13 and closed out the 3 & 2 win on the 16th hole. I was four-under for the round and really happy with the way I managed my game.”

South Africa will face New Zealand in today’s third round.

“I am absolutely delighted with the way the girls are holding their own in this top ranked field, especially against GB&I,” said Greasley.

“Despite really tight matches, they remain undaunted and have shown that South Africa is a force to be reckoned with. Emotionally it was quite an exhausting day for all of us on Thursday, but after an early night we are ready to face New Zealand in today’s third round.”

New Zealand beat Canada on the opening day to take the first round lead, and had a second round bye. Australia, who halved against Canada in the second round, will face GB&I in the third round.