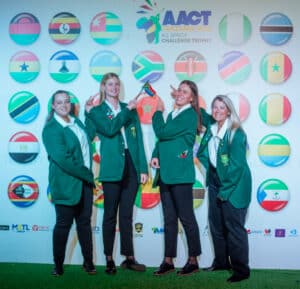 10 September 2022 – GolfRSA Women’s Protea side showed their tenacity and dug in their heels to secure a 14th continental title for the African powerhouse in the All Africa Challenge Trophy this September.

Trailing Tanzania and Kenya by one shot after an opening round of 149, Bobbi Brown and new caps Gabbi Venter and Bronwyn Doeg rallied over the final two days at the Dar Es Salaam Gymkhana Golf Club to emerge victorious.

The trio registered rounds of 145 and 150 to secure a five-shot victory over Morocco on a winning score of 444.

The host nation finished in third, ahead of Kenya, Zimbabwe and Uganda in a record field of 20 teams in this biennial team championship.

Brown, who won the individual title in the All Africa Junior Golf Championship in Egypt in March, lifted the Junior Individual title with rounds of Africa 72, 73 and 76. The Western Province junior was pipped for the Individual title though by Morocco’s Rich Intisar, who fired rounds of 76, 74 and 70 to claim a one-shot win.

GolfRSA’s number one Venter finished fourth overall with rounds of 77, 72 and 74, while three successive rounds of 78 earned Gauteng North’s Doeg a share of sixth in her international debut.

While the South Africans may have begun the week as firm favourites, there is mounting evidence that their dominance on the continent should not be taken for granted these days.

“Coming into the event, we knew that we would be pushed hard by a number of talented teams from the continent,” explained Womens Golf South Africa president Sarah Braude, who accompanied the team to the event.

“When we trailed Tanzania and Kenya by a stroke after the first round, we knew we needed to stick to our game plan and remain focused. Bobbi and Gabbi combined well to shoot us in to the lead after two rounds and from there it was a matter of knuckling down and securing the win. 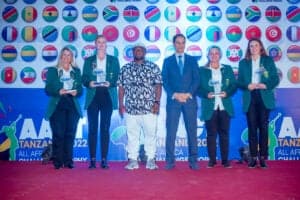 “We are immensely proud to have successfully defended our title, but also delighted to see the growth of young talent since the championship was last played in 2018. Even up to four years ago, we won the title with a landslide, but such is the development of women’s golf on the continent than we not only had 20 participating nations this year, but the standard of competition was really high.

“The All Africa Challenge Trophy is also where the biennial meeting of the Federations takes place.  Key is the exchange of lessons learnt and the discussions regarding the development of girls and women’s golf on the African continent and growing intra-continental participation in national championships.