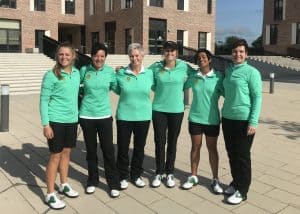 MAYNOOTH, Ireland (2 September 2018) – Inspired charges from Caitlyn Macnab and Kaleigh Telfer in the final round of the World Amateur Team Championship in Ireland ensured a strong top 15 finish for South Africa in the 28th Espirito Santo Trophy on Saturday.

The United States returned to the winner’s circle for the first time since 1998 with a runaway victory on 29-under-par 551.

South Korea finished one shot behind Japan to take bronze.

Along with Kajal Mistry, the youthful South African team did themselves proud in County Kildare.

Their two-under 578 total across four rounds split over the O’Meara and Montgomerie Courses at Carton House saw them share 15th with Austria.

Macnab was the standout South African performer all week and again shone in the closing round on the tough O’Meara Course. The 16-year-old Ekurhuleni junior saved her best for last and closed with a three-under-par 69 that shot South Africa up the leaderboard.

She finished on three-under 287 overall, securing a share of 12th in the individual competition.

The GolfRSA Elite Squad player turned two-under after a birdie at nine and was four-under after three birdies on the bounce from 11.

“I had a birdie chance from three metres at 10, but I misread the line,” Macnab said. “I bombed a great drive down 11 and landed a gap-wedge a foot from the hole for a tap-in birdie. I pured my 3-wood at 12 and had a sand-wedge in and sunk another short putt for birdie.

“On 13, I drove the green and two-putted for birdie. I dropped a shot 16 after I missed birdies chances inside three-metres at 14 and 15. I am really pleased that I had a strong finish. I struck the ball really well, and put my approach shots close when I got a good opportunity.”

Bryanston’s Telfer was two-over through 12, but turned things around with an eagle at the par five 13th and three consecutive birdies from 15. The Auburn University standout tied for 35th on one-over 291 individually.

Mistry from Randpark closed with a 77 to finish the week on 307.

Womens Golf South Africa President Sally Greasley applauded the team on their performance and their commitment to achieve the goal set for them at the start of the week.

“We set ourselves the goal of breaking par and finishing in the top 15 and the girls fought valiantly to make it happen,” said Greasley. “We didn’t make the start we’d hoped for, but their determination and commitment was above and beyond. We improved with every round and we are delighted with the overall result.

“The girls stuck to every process we implemented in our Elite Squad training camps over the last two years and we were so impressed with how they handled the pressure and setbacks. They never stopped fighting.”

The biennial Espirito Santo Trophy featured a record total of 57 countries this year.

South Africa won the championship in 2006 and this year’s top 15 finish marks the best result since Kelli Shean, Kim Williams and Connie Chen placed joint fourth in Argentina in 2010.

“We are greatly indebted to our national coach Val Holland, our team captain and physiotherapist Sandra Winter and our Elite Squad sport phycologist Maretha Claasen for preparing the girls so well for this championship,” Greasley said.

“Well done Caitlyn, Kaleigh and Kajal on your excellent result and for flying the South African flag with such pride and honour. This hugely encouraging performance is fantastic for the development initiatives we have implemented with our squad systems and I am certain that this performance will inspire the next wave of young champions at home.”