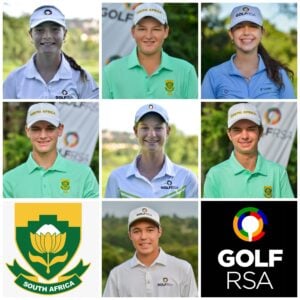 10 March 2022 – Seven of South Africa’s top junior talents have been selected to fly the flag for the country in the All-Africa Junior Golf Challenge in Egypt this month.

The prestigious junior team event will be contested at the Palm Hills Golf Course from 28-31 March. The winning boys team and runners-up, together with the winning girls team, in the African Qualifier will line up in the prestigious Toyota Junior Golf World Cup in Japan, where they will compete against the cream of global junior golf later this year.

Pascal Gunther and Joshua Koekemoer – respectively ranked second and fourth in the GolfRSA U-19 Rankings – and Fabrizio de Abreu, who is currently second in the U-17 Rankings, complete the Boys Team, while the other two members of the Girls Team will be 2022 SA Women’s Amateur finalist Kyra van Kan and reigning Nomads SA Girls champion Bobbi Brown.

“After a two-year absence due to the ongoing COVID-19 pandemic, we are delighted to see the All-Africa Junior Golf Challenge back on the international calendar this year,” said Grant Hepburn, CEO of GolfRSA.

“Team selections are never an easy task, and the All-Africa Junior Golf Challenge in Egypt was all the more challenging due to the COVID-19 protocols and travel document deadlines. We applaud the selection committees on choosing two strong, capable and well-deserving teams. These juniors have acquitted themselves very well over the last 12 months and have earned the honour of representing their country. We wish them well in their campaign in Egypt and we are confident that they will do the nation proud.”

It will be the second time that Bennett, Gunther and Koekemoer wear the green and gold this year, having made their national debut in the Team Competition in the African Amateur Stroke Play Championship at Leopard Creek last month.

“Dan has retained the No 1 ranking in the Boys U-19 and U-17 Rankings since his double triumph in the Nomads SA Boys U-17 and the Dimension Data U-19 Open at St Francis Links last October,” said South African Golf Association Acting President Henk Smith.

“We are delighted to give this quartet the deserving opportunity to gain more exposure to international competition as they line up to hunt South Africa’s 26th victory in the All-Africa Junior Golf Challenge in Egypt.”

Whateley, Van Kan and Brown will be focused on carrying on the legacy of South Africa’s domination in the Girls Competition since Kajal Mistry, Kaleigh Telfer and Symone Henriques won the inaugural Girls title in 2017 in Zimbabwe.

It will be a second international appearance for Whateley, who teed it up in the prestigious Hilton Grand Vacations ANNIKA Invitational presented by Rolex Invitational in Florida in January.

“South Africa has a very proud track record in this prestigious tournament and high expectations are part and parcel of the team representing GolfRSA in the All-Africa Junior Golf Challenge, but it is important to remember that this event represents a wonderful development opportunity for our top juniors to test themselves against the best young golfers in Africa,” said Womens Golf South Africa President Sarah Braude.

“Thanks to the incredible support our juniors receive from our GolfRSA National Squad, their unions and golf clubs, these young players are excelling as expected. We know this trio will do everything they can to keep South Africa’s winning streak alive and we are confident that they are up to the task at hand and will do themselves and the country proud.”