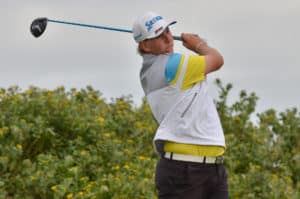 Ayden Senger bounced back from the heartache of losing in a play-off at Clovelly last month to win his first Bridge Fund Managers Junior Series title of the season at Royal Cape Golf Club on Sunday 13 October 2019.

By shooting a 2-under 70 in challenging conditions at Royal Cape, 18-year-old Ayden qualified for the #BridgeJuniorSeries regional final, where he will compete for the ultimate prize – an all-expenses paid trip to the North and South Junior Championship at Pinehurst, USA in July 2020.

Ayden was the only player in the field to match the testing way that Royal Cape had been set up for the tournament, with all of the pins seemingly placed at inaccessible spots on the greens. One junior golfer who had no problem finding at least one of the pins, was 15-year-old Paarl Boys High pupil John Rabie who took home a R5000 Bridge Fund Managers Unit Trust for acing the 8th hole.

A chip in for birdie on the tough 3rd gave Ayden the early lead. But a double drop on the following hole set him back. A birdie on the short 8th got him back to level, but he immediately gave the shot back on the 9th. However, consecutive birdies on 12 and 13 and on 15 and 16 saw Ayden pull away from the field and seal victory.

“I haven’t played Royal Cape in a while and it was much tighter than I remember,” he said. “I hit my driver so straight today and that is probably why I won, because keeping your ball out of the trees off the tee was key.”

Ayden is determined to win the Bridge Junior Series regional final and follow in the footsteps of fellow Durbanville Golf Club member Tyran Snyders, who in July became the first South Africa to win the North and South Junior Championship at Pinehurst.

“Everyone young South African golfer dreams about playing in America, against the best in the world,” he said. “So, having a shot at playing Pinehurst was one of my goals for the year.”

The juniorseries.bridgefm.co.za launched in 2017, is managed by the SA Golf Development Board and endorsed by GolfRSA. Open to boys and girls in the U13 and U19 divisions, the Series is played across 18 tournaments hosted by leading courses countrywide. The 18 tournament winners contest 36-hole regional finals in April 2020 with the two winners jetting off to Pinehurst.

“We are delighted that Ayden managed to secure a spot in the regional finals by winning at Royal Cape,” said Paul Stewart, Chief Executive at Bridge Fund Managers. “He is a young man with a very calm head, which is a big advantage when facing the challenges golf inevitably throws your way.”