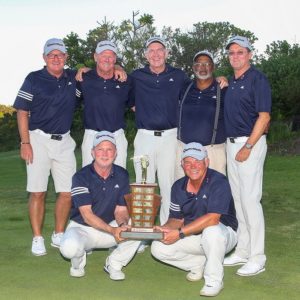 11 December 2017 – Western Province celebrated an extraordinary achievement when the team wrapped up their seventh successive triumph in the South African Super Senior Inter-Provincial Championship at Pezula Golf Club in Knysna from 4-8 December.

The defending champions made a bold statement of intent with a resounding 7.5 – 1.5 victory over North West in the first round. They kept on track with a convincing 6 – 3 result against Southern Cape in round and the 6.5 – 2.5 outcome against KwaZulu-Natal in round three strengthened their resolve.

All that stood between Western Province and history was the double bill against Central Gauteng and Ekurhuleni on the last day.

“We were pretty confident going into the final round, but we knew it would be a humdinger,” said Western Province manager Trevor Steensma. “Every guy on the team knew the stakes and they were ready to leave it all out there.”

Western Province made a great start against Ekurhuleni to bank all three points in the Foursomes. Anton Bezuidenhout, Mark Hair and Henry Trevenna won their Singles and Herman September halved against David Jessup from Ekurhuleni to seal a 6.5 – 2.5 result for Western Province.

Central Gauteng beat Southern Cape 6 – 3 in the first round and defeated North West 7 – 2 in round three, but they suffered a hiccup against KwaZulu-Natal in round two when Stephen Meyer fell ill. He soldiered on in the foursomes, but had to be hospitalised and his singles game was conceded.

The end result was a 4.5 draw, which meant Central Gauteng had to beat both Ekurhuleni and Western Province to win the championship.

“Central beat Ekurhuleni 5 – 4, so the chase was on,” said Steensma. “We were 2-1 down after the Foursomes and, as expected, the match went right down to the wire.”

John Winter took first blood for Western Province when he beat Colin Weinstein 4 & 3 to stretch their lead to 3 – 1. The score stood at 4 – 2 after Jan Vorster and Bezuidenhout halved against Meyer and Ian Smith respectively. Richard Bruyns eagled 16 while opponent Hair had eagles at nine and 13, but Bruyns got an all-important point when he defeated Hair 3 & 1. When Jock Wellington downed Trevenna 3 & 2, the teams were tied at 4-all.

“It came down to the game between Herman and Dave Jessup,” said Steensma. “Herman was dormie three when he opened the door for Dave with a three-putt at 15. Then Dave made a brilliant birdie from nowhere at 16 and he birdied 17 to square the game.

“Herman is an old hand, though. He is very experienced and doesn’t fluster easily. The pressure was on Dave, who had to win the final hole. Dave had a real slider from about 25 foot for birdie and Herman was about 10 feet from the hole. When Dave missed, Herman knew two putts for a halve would win the championship for us and he delivered.

“I am incredibly proud of this team and with their never-say-die attitude. When we came down to Knysna two weeks before the tournament, I already had a sense that this team could to it. Their team spirit was incredible. They had a huge goal, but they were 100 % committed. They are a team of stars who really played for each other.”

Steensma said he was also impressed by the spirit in which the championship was contested.

“There was an incredible spirit and camaraderie between all the teams that was just fantastic,” he said. “You never heard complaints. Just praise for great shots and putts and good-hearted banter. I also want to congratulate Pezula. This has to be one of the most magnificent courses in South Africa and it was the perfect backdrop to a truly fantastic championship.”

Twelve months after they were relegated, Gauteng North went undefeated in the battle for promotion against Boland, Border, Eastern Province, Free State and Northern Cape to lift the B-Division title and guarantee their return to the A-Division.