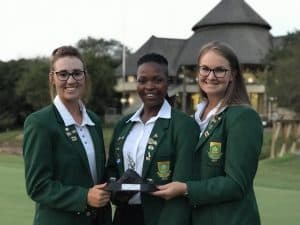 GolfRSA Elite Squad members Myeki and Bouch combined for an eight-over 150 in Thursday’s final round at the Nkonyeni Lodge and Golf Estate to seal a successful title defence in the prestigious team event with a winning total of 434.

The Eswatini team posted rounds of 163, 167 and 166 for a tournament total of 496 to finish in second, beating Zimbabwe by eight shots.

On a tough scoring day, Myeki was three over after the first five holes and made a bogey start to the back nine, but she rallied with a birdie par three 11th and picked up another shot at par five 14th. Two more bogeys at 15 and 17 saw her clock in with a four-over-par 75.

“I wasn’t great off the tee today, and dropped shots at one, three and five,” said the Randpark golfer.

“I steadied the ship with pars at six and seven and made a great par on the eighth. I hit my tee shot down the middle and took 8-iron for my approach from 144 metres. I came up short of the green, but chipped it to two metres and holed the putt.

“At the short hole (11), I hit pitching-wedge from 128 to three metres and made the putt. I pushed my tee shot right at 12, but made a great par save after punching out. The birdie at 14 was awesome. I had 213 metres to the flag and hit 5-wood in. The ball perched on the edge of the green and I two-putted for birdie from about 17 metres out.

“It was not an easy day, but I kept grinding and I’m happy with the score I achieved. I am so proud to share this moment with Sarah for a second time and with Larissa. We are over the moon.” 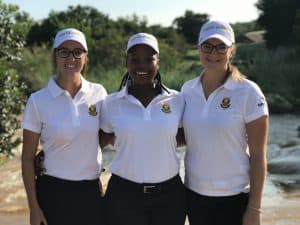 Bouch, who celebrated South Africa’s sixth victory with Myeki in Lesotho two years ago, was just as thrilled to help South Africa to victory.

“I drove the ball really nicely, putted extremely well, but it was a very hot and windy day, which made club selection quite difficult,” Bouch said. “I made a few good up-and-down par saves, but the wrong club selection at the seventh cost me a shot.

“At 13, I drove it next to the green and made the up-and-down for birdie. The next hole was playing straight down wind and downhill. I finished just short of the green, but once again, hit a great chip and made the birdie putt. Unfortunately the doubles cost me but overall, I’m really happy with my game… onwards and upwards from here.”

New cap Du Preez helped to boost South Africa into a favourable position with earlier rounds of 71 and 73. The Silver Lakes golfer returned a non-counting 79 in the final round.

“I didn’t hit many fairways and that made the approach shots all the more difficult,” said the Ernie Els and Fancourt Foundation member. “I four-putted for bogey at five and I was quite upset with my silly mistake. From there on I struggled for pars, but I made a good birdie on seven and 10.

“I battled on the greens coming home and that costs me a few shots, especially the doubles at 16 and 17. I am grateful to GolfRSA and Womens Golf South Africa (WGSA) for the opportunity to represent South Africa with Sarah and Zethu. This has been a fantastic experience.” 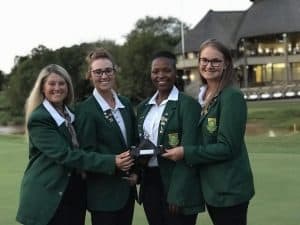 “The tournament hosts Eswatini, headed up by President Theresa Fawcett, who also competed, has been amazing and their dedicated team of volunteers have presented a superb Regional All-Africa Challenge Trophy.

“We also applaud general manager Frans Strauss and his team for presenting us a course in true championship status.

“I am very proud of Team South Africa on defending the title. Zethu, Sarah and Larissa performed with pride, both on and off the golf course, and this victory means so much to them. We are also very proud of Zethu, who won the Individual Competition and set a new course record with her three-under-par 68 in round two. We leave having rekindled friendships and having made many new friends in women’s amateur golf in Sub-Saharan Africa.”