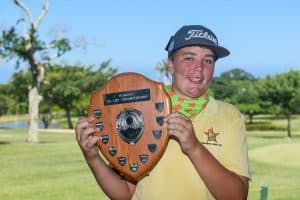 8 January 2021 – Keegan Shutt from Zimbabwe celebrated his first victory on South African soil in the Nomads SA Under-15 Championship at Selborne Golf Club on Friday.

The 14-year-old sandwiched a flawless one-under 71 between two rounds of 75 to record a two-shot triumph on five-over 221.

The South Coast once again proved a happy hunting ground for Shutt, who won the Under-19 division of the SA Kids Golf Junior African Challenge at San Lameer last year.

He led the Nomads National Order of Merit Coastal at the same venue earlier in the week but took himself out of the title race with an expensive 75 in the final round. Now Shutt has the satisfaction of putting a GolfRSA National Junior title behind his name.

“I’m really, really pleased to have pulled this one through,” said the Chapman golfer. “I want to give my coach back home, Roger Bailey, a shout out and thank my parents for their support. And a massive thanks to Nomads for supporting junior golf in these difficult times. Also big ups to GolfRSA for everything they did during the tournament with the Covid strategies to keep us safe during the two tournaments.”

Shutt opened with a 75 and trailed first round leader Ben Weber by four shots, but a solid performance in the second round rocketed the Chapman golfer to the summit.

He strung together 17 pars, interrupted by a lone birdie on the par three 15th, to start the final round on two-over with a three-shot lead over Johndre Ludick from Eastern Province, Southern Cape’s Reinhardt Uys 74 75, Ekurhuleni’s Marno Lange and Akil Maduray from KwaZulu-Natal. 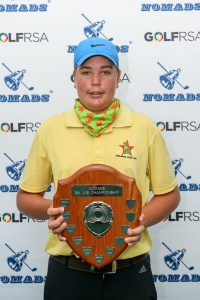 “The conditions were just perfect on Thursday,” Shutt said.

“The wind howled on all the other days, but there was a light breeze. The last nine holes play a lot longer and is way hillier, with elevated greens and tees. It was nice to hit some confident shots and walk off with a 71.

“The wind was up again in the final round, especially after the turn. I played well and putted wel, but the last nine holes were tight. It was a relief to know I had a couple of shots in hand playing the final hole.

Shutt attended St John’s College in Harare, but next week he starts a new chapter at KeNako Golf Academy in George.

“I’m really excited about the move to the Southern Cape. I’m going to get settled in and then I’m playing all the events on the African Swing. It’s great to have this big win under the belt at the start of the season, and I look forward to competing in the SA Stroke Play, SA Amateur and African Amateur.”

GolfRSA National Squad member Lange fired a final round 74 to take sole second, while Janko van der Merwe from North West and Weber tied for third on nine-over. Hendre van der Watt from Free State round out the top five on 10-over 226.

Ludick from Graaff Reinett was the top performer from the South African Golf Development Board group. He carded rounds of 76, 73 and 81 to finish eighth overall on 14-over.