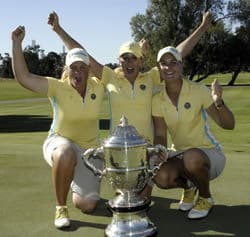 Adelaide, Australia (11 October) – Sweden held the lead from the start to finish to capture the Espirito Santo Trophy and win the 2008 Women’s World Amateur Team Championship by 12 strokes over Spain and 14 over the USA at The Grange Golf Club’s East and West courses.

“It’s a fantastic feeling,” Sweden’s captain Walter Danewid said. “I am not surprised we are here because they are really good players. It’s been advertised that this event would have the stars of tomorrow. They lived up to that.”

Sweden, the only team to have finished in the top 10 in all 23 competitions, won its second championship after taking the victory in Puerto Rico in 2004. Their wire-to-wire win was the first in 18 years, since the USA did so in 1990.

“I was asked: ‘What is the secret to our success?,” Danewid said. “It’s hard work. There’s no secret.”

Spain finished second at 7-under 573 and could not make up the large deficit.

“We tried as hard as we could,” Spanish captain Macarena Campomanes, who was on two Espirito Santo winning teams. “But they were too many shots ahead.”

The best move of the day came from the USA. Amanda Blumenherst shot 4-under 68 and Tiffany Joh added a 3-under 69 for 137, the second-lowest final round score in history. The Americans jumped from a tie for 17th after the first day to third-place. 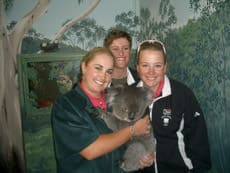 “The first day was like the wind out of our sails,”‘ Blumenherst said. “We definitely fought back and played hard the last three days.”

The Americans posted the lowest score in the final 36 holes (279) in championship history.

Canada finished fourth at 583, followed by Japan in fifth at 584, Germany in sixth at 585, England in seventh at 586, Netherlands and Denmark tied for eighth at 587 and defending champion South Africa in 10th at 588.

Although there is not individual recognition, Caroline Hedwall of Sweden was the low scorer at 10-under-par 280.

In the biennial Women’s World Amateur, each team, which has two or three players, plays 18 holes of stroke play for four days. In each round, the total of the two lowest scores constitutes the team score for the round. The four-day (72-hole total is the team’s score for the championship.

The 2010 championships will be played in Buenos Aires, Argentina.

For more information and scoring visit www.internationalgolffederation.org and click on the WATC Scoring icon.