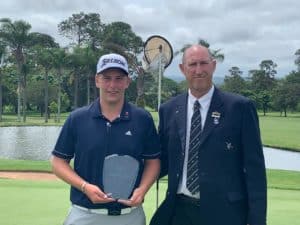 8 January 2020 – Ayden Senger’s smile literally lit up the clubhouse at Mount Edgecombe Country Club after he finally got over the line to lift his first national title in the Nomads National Order of Merit Coastal 1 on Tuesday.

Having been denied four times the last two years – and twice last season – the 18-year-old Western Province junior once again required extra holes after finishing 54 holes of regulation play in the season-opening event on the Woods Course tied for the lead with Luka Stanislavijevic.

This time, however, he emerged victorious.

Senger and Stanislavijevic started the day four shots back of overnight leader Cole Stevens, but the Durbanville golfer quickly reeled in the GolfRSA National Squad member with a run of five straight birdies from the third hole.

However, he gave shots back on the ninth and 12th holes, which gave Stanislavijevic a chance to catch up. The Blue Valley golfer birdied the par four 13th and set the clubhouse target with a flawless three-under-par 67.

Once again Senger forced a tournament into extra time when he holed a clutch putt on 18 for 67.

“Luca won the toss and teed off first. He hit his drive a touch left into the rough. I realised he wouldn’t have an easy shot from there over the water short left of the green to a pin back left and I knew I needed to trust my drive,” explained Senger.

“I smashed it right down the middle. It was probably the best drive I’ve hit my career. When his second shot flew the green and left him with a tough chip, I knew I could do it. I just needed to hit it to the middle of the green and I executed my second shot perfectly. When his chip ran about 16 feet past, I lagged my first putt give and popped the par-putt in for the win.

“In the last two years, I was beaten in play-offs four times in national amateur events and I also lost in a play-off on the Bridge Fund Managers Juniors Series last year. I was determined not to let any negative thoughts cloud my judgement. Before the playoff I just told myself to focus on the golf and not think about anything that had happened in the past. 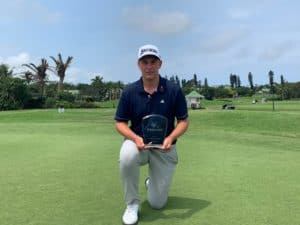 “It feels amazing to having finally have a national win under my belt. It was one of my goals for the past two years so I’m delighted to have achieved it. Right at the start of the new season. I believe I still have more trophies to collect, because I have some more goals to achieve.”

Senger gained invaluable experience competing in the St Andrews Boys’ Open last year, where he reached the final but bowed out to Frenchman Edouard Cereto. Having rocketed to sixth in the GolfRSA Junior Rankings, he hopes to draw on that experience to seal another top three finish in the Nomads National Order of Merit Inland, which tees off at Benoni Country Club on Thursday.

“The win at Mount Edgecombe got me one step closer to the top four and if I can reel in another top three finish in Benoni, I’ll be even closer to two more items on my bucket list for this year,” he said.

“I really hope to crack the nod for the GolfRSA National Squad and I desperately want secure a return trip to Japan to have another stab at the Toyota Junior Golf World Cup. It was amazing to share in the excitement when our Junior Proteas won last year, and it would be a dream come true if I can make the team for Japan again.”

Senger will have to watch out for Boland’s Hezron Frieslaar, who led the first round and Stevens, the 36-hole leader.

The pair had to settle for joint third, but they will be gunning for the winner’s circle in Benoni alongside GolfRSA National Squad member Christiaan Maas, whose final round 66 earned him a share of fifth with Nico Booysens, Lyle Pedro and Ivan Verster.