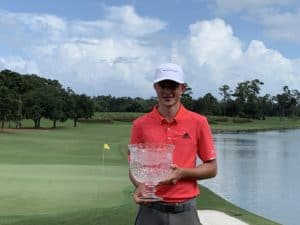 1 September 2019 – Third time’s the charm for South Africa’s Jayden Schaper, who muscled his way to victory at the AJGA Junior Players Championship in the United States on Saturday.

“It really feels amazing on my third go, to finally get the win,” the country’s leading amateur said after he holed a clutch six-foot putt at the final hole to cement a one-shot victory on six-under-par 210.

With Hurricane Dorian closing in on the coast of Florida, the invitation-only junior event at the iconic TPC Sawgrass was condensed into two days.

The field teed off the first round in driving rain that swept across the Stadium Course in the morning, but 18-year-old Schaper wasted no time in living up to his billing. He broke into the top four with an opening three-under-par 69 and, in the afternoon, the Ebotse golfer braved the elements to card a 70 that earned him a share the lead with American Brett Robert on four-under.

“In a lot of our tournaments back home, we play 36 holes on the first day and 18 on the last, so the change in format didn’t really faze me,” he said. “It’s one of my most favourite courses and it was such a big goal of mine. It hasn’t really sunk in, but I’m just over the moon to call myself a Junior Players champion.”

Exhibiting the same cool and composed demeanour that saw him triumph under great pressure in the South African Stroke Play Championship earlier this year, Schaper was the picture of calm on the final day. He got off to a birdie start at the par four first and parred the next four holes before a birdie at the par four sixth took him clear of the chasing pack on six-under.

“I had a terrible warm-up session on the range and I just wasn’t striking it well at all,” he said. “Then I got on the first tee, striped it down the middle and made birdie and that settled the nerves.”

Once he got his nose in front, Schaper never relinquished the lead.

Despite spirited charges from Bo Jin from China and Australian Karl Vilips, and successive bogeys at the seventh and eighth holes, Schaper turned level and rallied with two birdies on the bounce on the par-five 11th and par four 12th to get back to six-under.

“After the wobble on the front nine, I kept it simple. I hit fairways and greens and I was able to keep myself in it,” Schaper said.

The South African offset a third bogey at the short 13th with his fifth gain, at the par four 15th, and two solid pars saw him reach the final hole with a two-shot lead.

“I always try to keep my head down in tournaments, focus on my own game and play one shot at a time. I knew what the guys in my group were doing, but not much else,” he said.

“I missed a short birdie putt on 16 and I was happy to walk away with a good par on 17. I don’t care what anyone says, standing on that tee, you don’t want to be the guy who hits it in the water. I felt comfortable coming up 18. I’ve felt good about that tee shot all week.

“I asked what the leaderboard was doing and they told me I was two shots ahead, but Bo Jin had a six-foot putt for birdie. I hit a good drive down the middle, and I heard the cheers and knew I only needed par to win.

“The club I had in my hand was the same one I used to make a birdie two years ago to make the International Team for the Junior Presidents Cup. Then I blocked the shot right and it came up just short right of the green. Not a great shot and I wasn’t too happy with it. I was calm, though, by the time I got to my ball, and I chipped it to six feet below the hole and sunk the putt.”

Schaper became the fifth international winner in the 13 year history of the event.

“The thought of winning it was there in the back of my mind when we arrived, but I didn’t think it could really happen. To get a win over here in the United States in this kind of field is amazing. I had some trouble during the tournament, but I backed it up with some good golf,” Schaper said.

Jin signed off with a 70 to take second, and Vilips sealed third on four-under with final round 70.

At the tender age of 16, Schaper became the first junior in the golfing history of South Africa to achieve the ‘grand slam’ of Nomads SA Boys titles, winning the U-13, U-15 and U-17 tournaments and the elusive double at the Nomads SA Boys U-19 Championship, and anyone following his career would not be surprised by his breakthrough in the United States.

The Benoni golfer recently held his own in the 192-strong field that lined up in the Challenge Tour’s inaugural ISPS Handa World Invitational, presented by Modest! Golf Management. Not only did he take the amateur honour at the Galgorm Spa and Golf Resort, but Schaper outclassed some top professionals to tie for 26th.

“I gained so much from the experience of participating in two GolfRSA National Squad Tours to the United Kingdom and Ireland, where we competed against the best amateurs in the world in top class amateur events,” Schaper said.

“My coach Grant Veenstra has also helped me with my mental game. I can stay in the moment and shut out everything else that happens on the course around me, which is a huge benefit for me. And the support from my family, my coach and GolfRSA has been amazing. They have given me the tools to just go out there and play and I’m really grateful for their efforts to help me advance my career.”

Not only has he comfortably made the International Team for the 2019 Junior Presidents Cup, but the junior has earned himself an invitation to the Alfred Dunhill Links Championship, courtesy of businessman and GolfRSA patron, Johann Rupert.

“I’m super excited to go back to Leopard Creek,” said Schaper, who tied for fourth in the African Amateur Championship at Leopard Creek in February.

“It’s a huge prize! Leopard Creek one of my favourite courses and it will be incredible to tee it up with the pros and see how my game holds up,” Schaper said. “Mr Rupert has done so much for golf and GolfRSA and I just want to say I’m so grateful to be on the receiving end of his goodwill and his incredible passion for South African golf.” 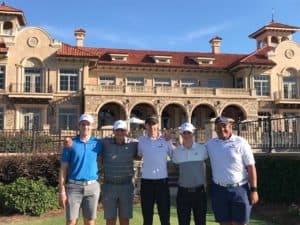 While Schaper came up trumps in the Junior Players Championship, the rest of the GolfRSA National Squad members had mixed results.

Duminy and Jarvis are currently ninth and 13th in the International Team standings and will have to wait until Wednesday when the World Amateur Golf Rankings are updated to see if they will join Vorster (2), Schaper (3), Simpson (5) and Christo Lamprecht (6) for the matches against the United States at Royal Melbourne Golf Club in December.