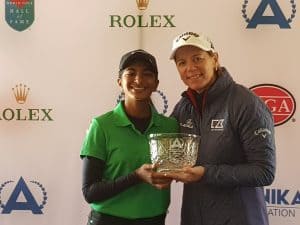 Bryanston’s Moodley began the final day at the World Golf Village Resort with a two-shot cushion after rounds of 72 and 68 at the Slammer and Squire.

The 17-year-old golfer bogeyed at four and five, but held on to the lead with a birdie at the seven. Bogeys either side of a birdie at par three 15th for a two-over 74 landed the South African in the three-way tie for the lead at the end of regulation play.

Earlier American Jensen Castle had joined Moodley at the top of the leaderboard on two-under 214 with a brace of gains at 14 and 15. The West Columbia golfer played the last three holes in par and closed with a two-under 70 to set the clubhouse target on 214.

Sweden’s Ingrid Lindblad, who started the final day three off the pace, eagled the par-four 14th to join the leaders at two-under. She made a great up-and-down at the 18th for a 71 to force a three-way play-off. The trio returned to the par-four ninth, where the Halmstad native became the first Swedish-born champion of the tournament with a two-putt par after Moodley and Castle both missed the green with their second shots.

Moodley took a lot of positives from her performance against a world-class field under trying conditions in the highly-ranked event.

“If someone had told me last week that I would get this far in the Annika Invitational USA, I would have thought they were crazy.  Before I arrived here, I would have been happy with a spot in the top 20,” Moodley said.

“I have to admit, although this was a good overall result for me, I am a disappointed, because I could have gone all the way. After two days of solid golf in very windy conditions, I just wasn’t my best in the final round. I struggled with club selection and I had to scramble for pars. I didn’t give myself enough birdie chances and I made some mistakes, which resulted in bogeys.

“Players were holing their second shots for eagle and making great birdies around me, which put a lot of pressure on me, but that said, I held on to the lead until the very end, before losing in the play-off.

“I take so many positives out of this week. I shot the lowest round of the tournament. I tied for second in my first ever Annika Invitational and first-ever American Junior Golf Association event. I played with some of the best juniors in the world and I made lots of friends. I had a couple of chats with Annika Sorenstam along the way and I proudly flew the South African flag. So, despite not winning, there are loads to be proud of and to build on in the future.” 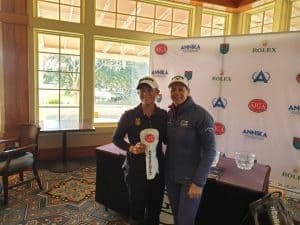 Macnab battled with swing problems over the first two days and paid the price of errant tee shots with rounds of 77 and 81. The Serengeti golfer bounced back with a final round 70, though, to share the low round honours on the final day.

“I spent a lot of time working on my swing and I hit the ball so much better,” said 17-year-old Macnab. “I hit 11 out of 14 fairways and 14 greens, and I made four birdies, three of them in a row on my front nine. I also missed 10 birdie putts today, so it could have been even better.

“I am very grateful for the opportunity GolfRSA and WGSA gave me to compete in an event of this stature. The final round finish took the sting out a little, because I was extremely disappointed with the way I played over the first two rounds. This was such an incredible experience and I’m determined to take the positives back home and work hard so I can come back even stronger next time.”