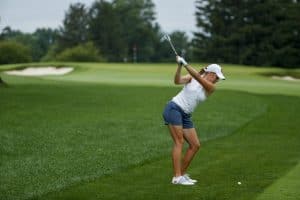 In her first competitive outing since she won her second collegiate title in the Northrop Grumman Regional Challenge in March, Telfer fired rounds of 71 and 75 in the 36-hole stroke play qualifier at Woodmont Country Club.

In her next match, the GolfRSA Elite Squad member trailed for 14 holes against Virginia Tech’s Emily Mahar. She was 3-down with four holes to play before she rallied to win the 15th, 16th and 17th holes to extend the match. Telfer sealed victory with a par on the 20th hole.

After a short break, the WGCA All-American faced Rachel Kuehn in the top 16.

In a close match, Telfer and Kuehn were tied through the first 10 holes, but the South African reeled in a trio of birdies on the 11th, 12th and 14th holes to defeat the 8th seeded American 2 & 1 for a quarter-final spot. 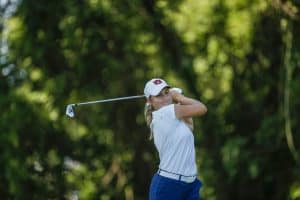 The 17-year-old Californian junior – making her sixth start in the premier women’s amateur championship – rallied from 2-down to knock out stroke play medallist Rachel Heck 1-up to reach the final eight.

Back-to-back birdies on the 13th and 14th gave Zhang the advantage again, and Telfer was unable to catch her, losing the match 2 & 1.

“It was my first tournament back, so I honestly wasn’t expecting much,” Telfer said.

“I’m really proud of myself that I made it that far and obviously a little disappointed. I didn’t play my best golf, but I am still proud that I made it to the quarterfinals in my first U.S. Women’s Amateur appearance. And it was just really great to get back out on the course.” 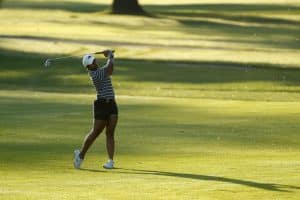 Fellow Ernie Els and Fancourt Foundation member Kajal Mistry, battling a niggling wrist injury, also qualified for the knockout stages. The 19-year-old GolfRSA Elite Squad member opened with an expensive 81 in the stroke play qualifier at the North Course, but in a stunning comeback, Mistry fired three-under-par 69 in the final round to match the low round of the day.

This left her with a chance to fight for a spot in a 15-strong play-off. The South African claimed the first of six spots on offer with a birdie at her first play-off hole. Unfortunately Mistry faced defending champion Gabriella Ruffles in what was always going to be a tough first round clash. Mistry was 1-up after the first eight holes, but the Australian world number 16 took control and won the match 3 & 2.

“It was a great experience and I’m really grateful for the chance to tee it up in such an amazing event,” said the former SA number 1. “It was awesome to get back on the course in a competitive setting again and I’ll be able to draw a lot on the experiences of this week going forward.”

Ruffles reached the 36-hole final for a second year running and will be facing Zhang in the battle for glory on Sunday.