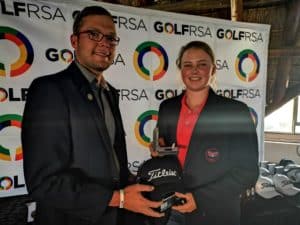 The 16-year-old Swellendam native scooped the individual honours with a one-shot victory on four-under-par 140 after posting rounds of 72 and 68.

Yurav Premlall set the first round target with a four-under 68, but the race to glory heated up over the first nine holes.

Streicher two-putted for birdie at the par five 14th and gained another shot at the par four 15th with a pin-seeking sand-wedge that landed three metres short of the pin.

A great 6-iron approach and a two-putt birdie at the par-five 18th saw her join the chasing pack.

The Boland golfer headed to the back nine on three-under, just a shot behind Premlall, and she blasted into the lead with an eagle-birdie start. “I hit a three-wood down the middle at the first, but I flew the green with a 5-iron from 180 metres,” said Streicher. “Then I chipped it on for eagle! At the next hole, I drove the green and two-putted for birdie from the fringe.

“I bogeyed the third, though, but kept it going nicely with five straight pars. Unfortunately my drive ran out on the 18th and I ended up in the hazard, in a pretty bad lie. I couldn’t do more than hack it out and I hit my third short of the green. I hit a good chip, but missed the par putt.

“I had no idea what was happening with the scores, so I played fairly stress-free golf. I didn’t know I had a two-shot lead playing the last, which is probably a good thing.” 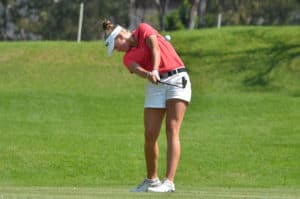 Streicher hit the golfing radar with a top six finish in the SA Women’s Stroke Play Championship in April.

She reached the semi-finals of the SA Women’s Amateur and a month later, the GolfRSA B-Squad member tied for third in her international debut at the ATI Ciputra Golfpreneur Junior World 2019 in Indonesia. She arrived at Koro Creek on the back of three successive top five finishes on the Womens Golf South Africa provincial circuit.

“I’ve played the course before and I knew the greens would be super-fast this time of year, but also knowing where to hit and miss helped a lot. The fairways are very dry this time of the year, so if the ball runs out, you can easily end up in the rough or worse. I didn’t miss many fairways, so that definitely helped me to score.

“The standard of competition is high and the course was tough, but it’s such a great week and a really great experience. I really hope that my victory this year will inspire more girls to fight for a spot on their school teams next year.”

Tournament director Gregory de Doncker from GolfRSA said he was impressed by the girls’ contributions during the championship.

“There were only three girls that entered in the 21 schools that participated this year. Somerset College entered Megan and Annelie Swanepoel from Somerset West College and Zahn Scholtz played for Framesby High.

“We set the girls off the red tees, so the course was only about 500 metres shorter for them, but they all played to the same pin positions, and there were some tough ones in the final round. What impressed was the fact that all three girls contributed to their teams’ scores in both rounds.

“Megan was really impressive with her accuracy off the tees and into the greens. She kept the ball in play and her course management was remarkable. She was a truly deserved winner and I hope to see more girls enter next year’s championship on the back of her win.”

Premlall, Van Wyk and Mostert tied for second on three-under after respective rounds of 73, 72 and 71, while Maas closed with a 71 to join Jean Pierre van der Watt in fifth on one-under.