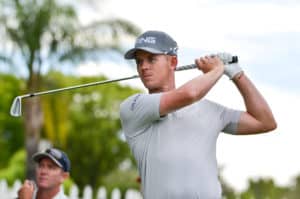 Former SA Open champion Brandon Stone paid the greenkeeping staff at Randpark Golf Club the highest possible compliment when he called the fairways of the Firethorn and Bushwillow Courses the best he’s seen anywhere in the last few years.

“They’re so perfect that you even feel guilty about taking a divot,” the 26-year-old said with a chuckle in a pre-tournament interview.

“And the greens are exceptional too. If you can stay on the fairways and hit the greens you can do well this week. That’s the key, but it’s not that easy to do. Both courses deserve respect.

“You have to drive the ball well off the tee. Firethorn has some really tough par-fours and if you’re off target the course will bite you. Bushwillow is shorter but it’s tight and, again, you have to keep it in play.”

In 2016, the former SA Amateur champion won the South African Open at Glendower in January of that year and the Alfred Dunhill Championship at Leopard Creek in December. And in 2018 he added the Scottish Open to his budding European Tour tally, famously shooting 60 en route to victory.as he fast gained a reputation as one of the best young players on tour.

Last year in Europe wasn’t his best by his own high standards but he’s been practising hard over the Christmas period and is now feeling really good about his game.

“I’m hitting the ball really well off the tee – driving is definitely one of my strong points – and I feel settled where the swing is. Louis (Oosthuizen), of course, won the SA Open here last year, and I believe the trophy is going to stay on home soil this time around as there’s a very strong South African contingent here this week. Besides Louis, we’ve got Branden Grace, Charl Schwartzel and a whole bunch of guys.”

Stone’s “bunch” includes 2019 European Tour winners Justin Harding, Erik van Rooyen and Christiaan Bezuidenhout, as well as Shaun Norris who won for a fourth year running in Japan where he finished second on the 2019 Japan Golf Tour Order of Merit.

Then there’s Stone himself, happy about his game and always ready for a bit of a laugh. “I’m feeling confident and one of the perks of being a former SA Open winner is that you get such a nice parking spot!”

Norris, 37, is just outside the top 50 in the world rankings and determined to take advantage of the pristine conditions this week to secure a spot in the Masters in April.

Losing his father Patrick to cancer in July last year was a devastating blow for both him and the rest of the family. “He’d been getting progressively ill for about six months and it took a toll on my golf,” Norris said. “Then he passed away, and again I had this huge weight on my shoulders.

“I asked my brother Kyle to caddie for me. I needed someone close who I could confide in. Then things started to improve and I played some really good golf over in Japan with him on the bag for 10 or 11 weeks. I was playing for my Dad, and I’ll be playing for him again this week.”