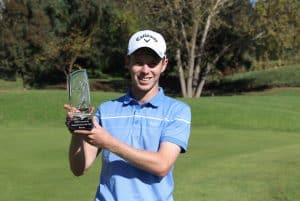 It took six extra holes, but Marco Steyn nailed the winning putt to beat Etienne Bond to become the second GolfRSA National Squad member this season and fourth in a year to win on the Big Easy Tour this season at Modderfontein Golf Club on Thursday.

Dylan Naidoo – who also plays out of Modderfontein Golf Club – was the first squad player to reach the winner’s circle on the Sunshine Tour’s development circuit when he won at Observatory Golf Club on 24 May.

It has been a productive month for Steyn, who joined an illustrious list of former champions including Charl Schwartzel, Brandon Stone and Haydn Porteous when he won the Oxigen Prince’s Grant National Amateur Invitational title by four strokes at Prince’s Grant.

The 19-year-old leaves for Great Britain with the Golf RSA National Squad next week to compete in three top international championships, including the Carrick Neill Scottish Men’s Open Championship, the St Andrews Links Trophy and the British Amateur Championship.

“I’ll be flying straight to the USA from England to take up a golf scholarship at Wake Forrest University in North Carolina, so this was my last tournament in South Africa for the foreseeable future,” said Steyn.

“It’s such a great feeling to be going to England on the back of a victory at my home course. Every win is special, but this one in particular, will stay with me for a long time.”

His second start on the Big Easy Tour was certainly an improvement over a joint 23rd finish at Glendower in 2015.

“This win is sign of serious progress for me,” the Tuks Sport Golf Academy player told Sunshine Tour communications manager Mike Green. “It feels great to win against pros. I am not the first amateur to win a Big Easy tournament, but it’s great to follow in the footsteps of my friends and I hope I can keep on doing that later on in my career.”

Steyn carded rounds of 68 and 69 at his home course to set clubhouse target seven-under-par 137.

Bond had a one shot edge but lost his advantage with a bogey at 17. Par at 18 for Bond saw the pair head back to the par five 18th for the sudden-death play-off.

Steyn and Bond squared 18 in pars twice, went down 10 in pars where Steyn missed a close putt to seal the deal and down 17, where they split the difference in pars again. “We went back to 18 and both made pars, but I finally ended it when I made two-putted from 15 feet for birdie,” said Steyn.

“Etienne hit approach into the trees and chipped from there into the bunker. I knew I had to take the opportunity to finish it off, but I hit my approach 15 feet past the flag. Etienne hit his trap shot very close and I knew I needed to get my first putt close for birdie to win.

“I had a downhill slider and I knew it would be lightning fast. I just tapped it lightly and let it run out to a foot from the hole and made the putt for the win.”

Steyn said he was slightly tense in regulation play, but with one of the best match play records on the Open Amateur circuit, his game plan for the play-off was simple.

“The nerves kicked in with three to play, but that’s why we play – to be in contention and to deal with the nerves,” he told Green.

“I finished quite nicely and luckily for me, Etienne dropped on 17 and I got into the play-off. In a play-off, you simply have to try and win each hole. You’ve got to be aggressive without getting yourself into trouble.

“I just stuck to my game plan, and because I know this course very well, I knew where to hit it and where to miss it. There are a few tricky putts out here and just keeping the ball in the easier areas helped a lot. But after a very long six holes, I’m so glad to get the job done.”