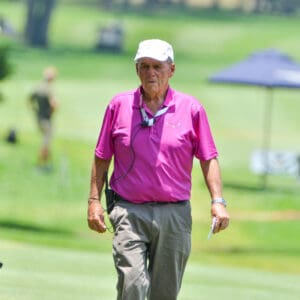 15 October 2022 – After 28 years in golf administration, former Executive Director of the SAGA Bruce Younge has – almost – hung up his clipboard and spray-paint can and retired to the Southern Cape. We had a chance to chat to Younge and reflect on a long and distinguished career, where he played a major role in shaping amateur golf in South Africa.

GolfRSA: Bruce, I trust you’re keeping well and the Handicap Index is coming down with all the golf you must be playing in George?

Bruce Younge: As you know golf is a fickle creature and once you think you have mastered the game to some degree the golfing gods show you otherwise! My HI is fluctuating from a low of 6 to 9 of late.

Tell us a little about your background in golf – when and where you started playing, when you knew the bug had bitten you and some of your earliest memories of playing the game.

I started playing around 12 or so with my father in a Sunday afternoon social game and interest grew from there. I played fairly regularly with mates in Bulawayo and ultimately represented Matabeleland Junior in the Inter Provincials. Unfortunately tennis was my first choice of sport, so I dedicated much of my time to that, with golf taking a back seat. I always had a passion for the game though. 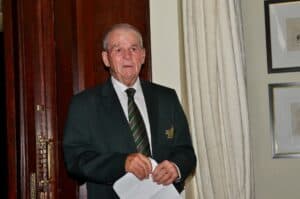 Younge spent a total of 28 years at the SAGA/GolfRSA.

How did you work path/career lead to the SAGA?
Prior to joining the South African Golf Union (as it was then known) much of my working life had been spent in the field of accounting and I held various posts as Company Secretary the last being with a JSE-listed mining company.

I worked as financial accountant for another mining group but they were always under strain financially and salaries were not guaranteed unless they had a good month. This led me to seek alternative employment and, when the SAGU job was advertised in the Sunday Times job section, I duly applied and after a couple of interviews with the Office Bearers at the time was offered the job of Executive Director of the South African Golf Union. The President at that time was Gerry Shuttleworth and vice was Cecil Wells.

What were the early days like when you started working at the SAGA?
They were very pressurised as we only had two members of staff, being the secretary and myself. Originally we did not have many tournaments to start with as we were still not permitted to play Internationally, but that situation changed in 1994 and we were allowed to play in the Zone V1 that year and the rest is history.

I served many roles, including Financial Accountant, Secretary and Tournament Director, responsible for everything at tournaments, including course set up, scoring and rules. We eventually managed to convince the Exec that we needed more staff and that was when we engaged Eden Thompson for the first time and Neil Homann followed a while later.

How many years did you end up working at the SAGA/GolfRSA? What were your roles?
I joined SAGU in October 1993. It changed name to the South African Golf Federation around Dec 1993 after the amalgamation with the South African Golf  Association at that time, which was the body representing players of colour.

I remained as Executive Director until 2017, when my title changed to General Manager Golf Operations and Finance, following to the formation of GolfRSA.

My roles diminished gradually over the next couple of years culminating in my consultant role for the whole of 2021. In total, that’s 28 years. 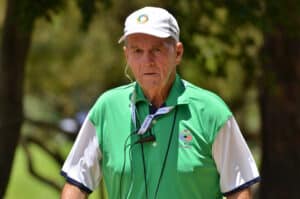 What memories stand out from your time there? What were the best parts about working for the organisation? What were some of the obstacles/challenges you and the organisation faced?
The main obstacle in the early years, even after the employment of Eden, was the chronic staff shortage we had to endure. There was literally no opportunity to take leave. Having said that, being Executive Director of the national body for golf in South Africa was extremely rewarding in terms of job satisfaction.

Being the Africa representative to the R&A Rules of Golf and Amateur Status Committee for around 15 years remains one of the highlights of the job.

Another plus factor emanating from working with the SAGA for all those years is the fact the I got to meet so many people from all walks of life, ranging from world national bodies to major sponsors to executive members from around the country.

I saw all the players evolve over the years from juniors to open amateurs to mid amateur and then to seniors, as well as those who came from the ranks to be highly successful professional golfers. You know all the names: Els and Oosthuizen (Open winners), Grace and Masters winners such as Immelman and Schwartzel who I knew in the junior ranks.

Over the years, you travelled with many teams to tournaments across the world – which memories stand out for you as highlights?
There were many highlights. The first that comes to mind was being manager of the National team to the Southern Cross tournament in Australia. Team players that year were Brandon Stone, Haydn Porteous, Jared Harvey and Ruan de Smidt. Also, being a part of the SA contingent to the Eisenhower Trophy in Puerto Rico (and others) brings back fond memories.

Who were some of the young amateurs that you saw and instantly thought – this guy is next-level good?
The list may be exhaustive, but Trevor Immelman and Rory Sabbatini (as juniors), Tim Clark, Charl Schwartzel Louis Oosthuizen (when he played country Districts for Southern Cape), Branden Grace, Haydn Porteous, Brandon Stone and Anton Haig.

You’ve also officiated in some Major championships and big events – tell us a little more about those experiences.
I have been extremely fortunate in that I have officiated at 13 Open Championships: the first being at Carnoustie in 2007, and the last being 2019 at Royal Portrush.

Those really were the highlights of any officialdom and simply cannot be beaten.  Second to that, and with all due respect I promise, are the many SA Opens I have officiated at, starting with the Dec 1993(4) at Glendower.

I have refereed for many “names” in our flagship championship and would include the likes of Els, Goosen, Oosthuizen, Grace, Stenson, McIlroy and many others. We had some fun with Cabrera at the Pearl Valley SA Open, where language posed a couple of problems when trying to explain a ruling! 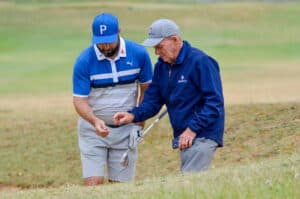 Have you ever been caught up in any rules controversies? It can’t be easy being a rules official and I’m sure some players get upset by receiving what they perceive to be an unfair ruling?
There have been many rules issues, but I would like to think that none constituted a controversy. I would like to believe that we were trained to deal with such situations and if there was any doubt, one always had the radio to call for help. Nevertheless, often players thought they were getting the short end of the stick with a ruling that went against them, but one must always remember that the referee rules what he knows and believes is correct and fair.

What are some of the strangest rulings you’ve had to give?
The strangest one occurred at Nelspruit’s par-five 4th hole. I was called to a ruling where the player’s ball, after the tee shot, was lodged in a two-litre plastic coke bottle high up in a tree. It turned out that the bottle contained 50% water and a dead frog, as the bottle was structured to be some sort of trap for frogs or birds or whatever. Unplayable in a movable obstruction up a tree!

What is the best rules change that the R&A/USGA has brought about in the last 30 years? And what rule could they do with tweaking?
I think the best was the change to allow the repair of any damage to the putting green surface. Another good change was to remove the penalty if you hit your equipment with your shot, as well as for accidentally moving your ball during a search or on the putting green – once it had been marked that is.

There has been, and always will be, a lot of argument to allow the drop from a divot in the fairway but I’m afraid I cannot share that sentiment as that would just be too big to manage – besides the fact that a divot is not an abnormal course condition.

What is something most people don’t know about setting up a course for a tournament?
We try to be fair to all participants and do not get some joy for setting up as hard and long as possible, just for some sadistic satisfaction. One should be proud of your course set up and there is nothing more satisfying than to hear players say “the course set up was great” or words to that effect. 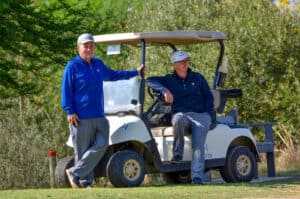 David Younge , the Tournament Director for the 2023 SA Amateur, is following in his father’s footsteps.

Your son David has followed in your footsteps at GolfRSA and is the Assistant Manager of Golf Operations. He’s also the Tournament Director for the SA Amateur next year. It must be pleasing to see the Younge legacy carried on through him?
I can comfortably say that I am very proud of that and also the work ethic that he has learned since being employed and maintaining the high standards we set for all our events. I can assure you that there was no favouritism at any time and, to be truthful,l perhaps the opposite could apply in that I probably was harder on him that one should perhaps be.

Finally, are you getting to play a lot more golf in your retirement? How often do you play and where?
I obviously have much more time to play golf now and all things being equal I get to play two or three times a week, which is plenty enough.  I am a member both at Kingswood Golf Estate (where I live) and George Golf Club and play mostly at those clubs – probably 66% at Kingswood though.

While not wanting to brag in any way (I promise), my best golfing achievement of late was to shoot lower than my age at that time – a 69 at Kingswood in May 2022. It was just one of those days when the ball hits the green and the putts are holed. The golfing gods have told me that this is a once-off and cannot and will not be repeated, and I believe them!

Bruce, I know it’s a little late, but on behalf of all amateur golfers, thank you for you many years of hard work, sacrifice and dedication to the amateur game. We hope you enjoy your retirement and that we get to see you out on the golf course, with clubs in hand rather than your walkie-talkie and clipboard!
Many thanks for this and your thoughts here are greatly appreciated. It was a very satisfying 28-odd years with the Association or GolfRSA and I am enjoying retirement here in George.

Fortunately I still get to assist at some GolfRSA events as well as some Sunshine Tour and Southern Cape tournaments, so I do keep a little busy from that perspective.

I know GolfRSA is in good hands, going from strength to strength, and following the incorporation of Womens Golf, Development Golf and Disabled Golf is truly recognised by the rest of the world as the governing body for amateur golf in South Africa.