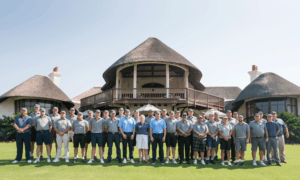 Dudley Annenburg, a 21-handicapper from Steenberg Golf Club in Cape Town, held his nerve on the daunting 18th hole at Leopard Creek Golf Club to lead his team to the inaugural Cape of Good Hope Wine Series title.

The two teams were neck and neck by the time they reached the par-five finishing hole. The iconic 18th at Leopard Creek, with its tricky island green, has dashed many dreams and it added a few more casualties when Da Silva, Senekal and Potgieter’s balls all found a watery grave. Annenburg’s ball ran through the green but stayed dry and the Steenberg man safely secured his bogey for 2 points and the championship title. 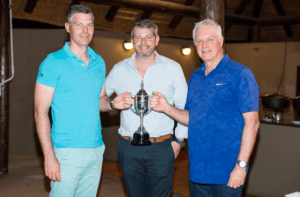 The prize is one that most golf fans could only dream of – an invitation to return to Leopard Creek in November to play in The Pro-Am of the Alfred Dunhill Championship.

A total of 14 pairs from across the country, with Handicap Indexes ranging from +1.1 to 22.1, contested the National Final of the Cape of Good Hope Wines Series, having qualified via their club event and a Regional Final.