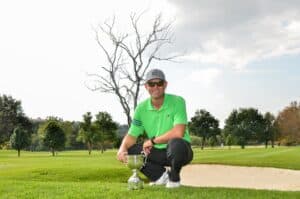 3 May 2022 – Upington’s Bertie Steenkamp kept calm amidst a late surge from former two-time champion Derek Scullard to claim a wire-to-wire win in the South African Mid-Amateur Stroke Play Championship this May.

The 39-year-old Upington golfer is no stranger to winning GolfRSA events, having claimed two GolfRSA Club Champion of Champions titles, but the massive distances to events from his home in the Northern Cape has limited his playing opportunities.

A three-stroke win against a field of the country’s top amateurs in the over-30 age group, at Royal Johannesburg & Kensington’s West Course represents his greatest golfing accomplishment yet.

Steenkamp opened his account with a round of 66 that featured seven birdies and just one dropped shot, and he never looked back.

He followed up his opening round with an excellent score of 70 to consolidate his lead before keeping things steady with a final round 71 to triumph on nine-under-par 207.

Scullard, the champion in 2018 and 2019, began the final round eight shots back but the Royal local fired six birdies and an eagle in a round of 66 to put the pressure on Steenkamp.

“I didn’t have a great start to the week, because I’ve had a bit of flu and earache, but I knew I had a good round in me and I’m glad I hung in there,” said Scullard. “I thought that maybe if he slipped over the last few holes, I might have a chance to force a playoff, but Bertie was just too solid coming in.”

Steenkamp got off to a great start, with birdies on the fourth, fifth and 11th holes and was three under for the day standing on the 15th tee, with a handy six-shot lead. 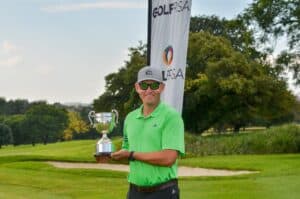 “I had been putting so well all week, so it caught me a bit by surprise when I three-putted 15 and 16,” he said. “I guess that comes down to the pressure of trying to win a national tournament.

“I’m so happy to win the SA Mid-Amateur Championship, because this really is a big event with really good players. It’s my first time competing in this event, and I came here hoping for a top 10. I thought if I played well, I might be able to contend.

“My driver, which is usually my weakness, was well behaved and I just kept on hitting fairways and greens and making the putts I needed to.”

Country Club Johannesburg’s Gareth Clements finished in third on three under, with Benoni Lake’s Rowan du Preez in fourth on one under and Aubrey Barnard of Irene Country Club rounding out the top five at level par.