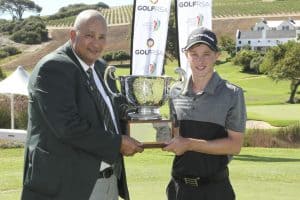 1 March 2019 – Almost from the time he hit his first shots as a two-year-old with a plastic set of clubs at San Lameer Country Club, Jayden Schaper has been a grinder.

A no frills, no fuss guy who was taught that good old fashioned hard work and an unflappable self-belief gets you the rewards.

With a trophy cabinet at home already bursting, it came as no surprise when the 17-year-old Benoni golfer grinded out a one-shot victory in the South African Stroke Play Championship on Friday.

Schaper’s workmanlike route around De Zalze Golf Club for rounds of 67 and a joint course record 63 earned him the 36-hole lead on 14-under-par. A steady third round 70 helped him to retain his five stroke overnight lead and South Africa’s top ranked junior pulled it through with a three-under-par 69 in the final round.

Despite coming under intense pressure from fellow GolfRSA National Squad member Deon Germishuys down the closing holes, Schaper was the coolest man on the 18th green as closed out victory on a 19-under 269 aggregate.

“I was still a little disappointed after I got knocked out at the SA Amateur last week, but this sure makes up for it,” said Schaper, who rose to second in the GolfRSA Open Amateur rankings following his winning performance in Stellenbosch. 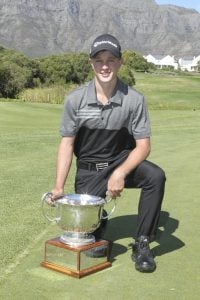 “This was something I also really wanted and I’m very proud that I achieved it. It was a very special week with my dad (Ryan) on the bag. He has been there for almost every important milestone in my career and I’m really glad we could share this experience.”

The Ebotse golfer was in firm control of the tournament over the first nine holes on the last day and turned with his five-shot lead in tact after birdies at six and eight.

Then Germishuys kicked into high gear with three birdies on the bounce from the 12th hole. When Schaper dropped at 15, the Grant Veenstra Junior Golf Academy player had to hold his nerve as the contest headed to a pressure-packed finale.

“I went first and drained the birdie putt, and Deon missed, I led by three shots going down 17. I laid up at the par five and hit a good third that landed 10 foot pin high left.

“Deon’s approach came up shot and his chip ran 10, 12 foot pas the flagstick, but he holed a great putt for birdie. I rushed my birdie putt just past the hole and tapped in for par.”

Germishuys need eagle at the very least to try and force a play-off. The Strand golfer bombed his drive down the final fairway, leaving himself a short pitch from 30 metres.

“My strategy all week was to play percentage golf,” Schaper said. “Hit fairways and greens and limit the mistakes. Pars can win you tournaments, too, so I wasn’t going to attack the final hole. I drove it down the middle and had 126 yards to the pin.

“My dad and I misjudged the wind a bit and played for the distance, but my approach came up short and spun back off the green. I wasn’t too impressed with the golfing gods just then. I lagged it up to three feet and watched as Deon drained another 12-footer for birdie.

“I will never forget the moment I sunk that winning putt. When I was warming up before the final round, I kept missing the short ones; those two to three foot downhill putts and I told my dad that I would probably have to hole one of these to win.

“I was thinking about that when I stood over the putt, but then I just got very calm. I boxed a lot of those this week, and I just had to do it again. This is something else. It’s quite special.”

Ernie Els and Fancourt Foundation member Germishuys carded 64 to close out second on 19-under.

Irishman Mark Power shot 67 and Stellenbosch golfer Hennie O’Kennedy returned a 69 to share third on 12-under. KwaZulu-Natal’s Malcolm Mitchell (66) and Conor Purcell from Ireland a further shot back in joint fifth.

World number 28 Nienaber, who was targeting the elusive double, began the final day tied for second with Germishuys, but he slipped from contention and finished 10th on eight-under after posting 75.