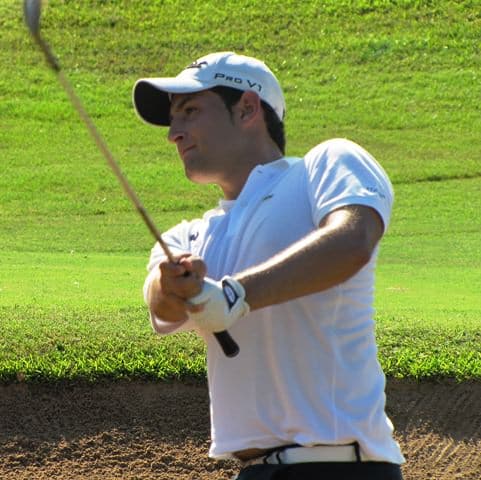 Overnight leader David Law of Scotland opened a yawning four-shot gap in the morning but found his advantage cut to just one in the second round of the South African Amateur Stroke Play Championship on Wednesday.

Playing in the last match of the day, Alexander Levy of France matched the leader’s five-under-par 67 to finish a stroke behind Law, perched at 13-under-par 131.

Local favourite Jared Harvey produced a seven-under-par 65 to launch within striking distance of the leaders. He joined South Africa’s number one, Danie Van Tonder, who also clocked in with a 67, on 10-under-par 134.

Law came to within two shots of matching the tournament’s 36-hole record, set by Dean Lambert with rounds of 62 and 67 at Oppenheimer Park in 2001. He slipped just once, three-putting on 18 for a pesky bogey.

“I still can’t manage to find a round without a bogey,” Law mused immediately after his round, but then consoled himself with the fact that he produced two rounds of rare quality to lead the tournament.

“Conditions were a wee bit calmer out there today,” he said. “I was very solid from tee to green and didn’t put myself into any trouble.”

Although Law described his round was pretty boring compared to the eagle and hole-in-one the first round dished up, he his putting was precise enough to convert six of those chances into birdies.

“Just the putter was a little cold,” he said. “I’m playing nice, but it could have been lower. You want to go out there and try to get yourself as far away from the field as possible, so it’s a great place to be. “It’s certainly something to build on for the last two rounds.”

As expected, Levy is right up there in the fight, but the anchor for the winning French Team at the 2010 Eisenhower trophy admitted the going tough after the turn.

The Frenchman stormed out of the blocks with bogey at the second, sandwiched among a string of four birdies over the first five holes. He completed the outward nine in 32 but limped home in 35.

“I started fast but I got just too tired on the back nine, because it’s too hot,” protested Levy.

“Maybe tomorrow, the breeze will come back. That will be much better.”

But the Frenchman was quick to point out that there were two rounds left and the tournament wasn’t over by a long stretch. “There are 36 holes left, so it’s anyone’s tournament. Me, of course I will try to win. So will Law and every South African here.”

Harvey erased a bogey at his second hole with successive birdies and an eagle but still finds himself with all the chasing to do in the final two rounds.

“I was out of the running yesterday and edgy when I started this morning, but that little run settled me down,” said the 22-year-old from Umhlanga. “Now I just have to keep the momentum going.”

Although scoring on average improved by three shots in mild conditions, not even a 20 shot swing was enough to lift Michael Dixon above the cut-line.

The Bryanston-based golfer retaliated with a second 68 but still finished on six-over-par, two shots over the cut set at 148.

But Law will have a chance again in the third round to try for that bogey-free round again and maybe, wrap up the tournament in his favour. “Today, I really thought I had it,” he said. “There’s always tomorrow.”