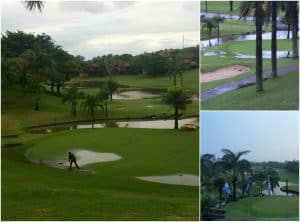 The first round of the 2017 SA Country Districts Inter-Provincial was cancelled after incessant rain over the last three days rendered the magnificent San Lameer Golf Estate course unplayable.

“More than 125mm of rain has fallen since Friday morning and despite the valiant efforts of the course staff, the course is still too waterlogged to start the championship,” said tournament director Bruce Younge.

“The first round Foursomes were out of the question, but we were hopeful to at least play the Singles today. However, the rain has been relentless and we were forced to call off the first round altogether. Under the tournament rules and conditions, all the first round matches have been halved.

“If the weather forecast pans out, the wet weather should clear later this afternoon and can get the second round underway on Tuesday.”

Younge said veteran champion Mark McNulty was a real silver lining for the players who were forced to spend the official practice round on Sunday in the clubhouse.

“We were very privileged to have Mark as our guest speaker during our opening ceremony dinner,” said Younge. “Mark won the Sunshine Tour Order of Merit a record eight times, he is a past winner of our flagship event, the South African Open Championship and he has enjoyed more than 50 victories worldwide. Since he turned 50, Mark has won eight times on the Champions Tour in the United States and just recently, he returned to his vintage best to seal a sensational wire-to-wire victory in his debut in the SA Senior Open

“It was a real honour to have someone of Mark’s calibre and experience address our players ahead of the championship and we hope his sage advice will serve our up-and-coming talent well in the future.”