Stars clash in the quarter finals 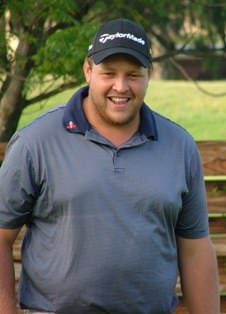 BENONI (4 March 2009) – The race to claim the most prestigious amateur title in South Africa will see two of the country’s top amateurs clash in the quarter-finals of the Glacier SA Amateur Championship at Benoni Country Club on Thursday.

Adrian Ford and Leon Knoll, ranked second and fifth respectively on the South African Golf Association’s national player rankings, have set themselves up for one of the feature matches of the championship so far.

Western Province golfer Ford won through with a 2 and 1 victory over Daniel Barrett on Wednesday morning and then a comfortable 4 and 3 win over JJ Senekal in the afternoon. Knoll beat Nicol van Wyk 2up and then Ruan de Smidt 1up.

Ford is well aware of the pressure on him to claim a major title such as this. “This is the biggest tournament of the year so the goal is certainly to win it,” he said. “But you also have to take it match for match and not get ahead of yourself and think about the final. I’m starting to hit the ball better and putting better, so hopefully the golf just gets better from here on.”

Dean O’Riley maintained his status as one of the favourites as he also progressed to the quarter-finals.

The race to claim the most prestigious amateur title in South Africa will see two of the country’s top amateurs clash in the quarter-finals of the Glacier SA Amateur Championship at Benoni Country Club on Thursday.O’Riley beat Bryn Flanagan 4 and 3 and then survived a near-upset against Daniel Gouws before winning 1up. The country’s top-ranked amateur was 3up with three to play and scrambled home for the win against Gouws, who earlier knocked out Aaron Russell.

“The wheels fell off a bit. I bogeyed the 16th and three-putted 17 to come down the last. But I managed to make birdie to finish it off. I put myself under too much pressure, but a win is a win. Hopefully I can see it through to the final now,” said O’Riley, who faces Pieter Moolman in the quarter-finals.

Moolman heads into the quarter-finals in good form with two big wins, including a 5 and 4 triumph over the more fancied Jake Redman and then another 5 and 4 victory over Gagan Verma.

Ryan Dreyer continued to surprise in his return to the game. Dreyer beat the capable Steven Ferreira 5 and 3 in the second round, and then won through to the quarter-finals with a 1up victory over Riekus Nortje.

“Beating Steven was a good win for me,” said Dreyer, who is making his comeback to the game after abandoning life as a tour professional and then regaining his amateur status following two years away from golf.

“I don’t know these guys at all. So the night before I climbed on the internet to find out more about Ferreira. I saw he’d finished top five in six of his last eight tournaments, so I was a bit worried to say the least.”

Dreyer also didn’t start well, bogeying his first two holes to go 2down.
“It wasn’t the best of starts and I thought, ‘Oh no, this is going to be really embarrassing’. But I ground it out, as I always do. He made one or two mistakes and let me back in, so I took full advantage.”

Scores from the second and third rounds of the Glacier SA Amateur Championship, played at the par-72 Benoni Country Club on Wednesday: