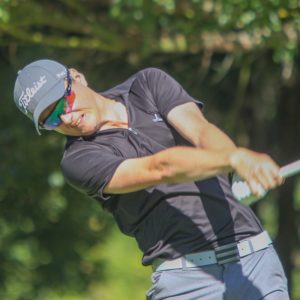 3 May 2018 – The 2018 South African Mid-Amateur Championship is set for an enthralling finale after Derek Scullard from KwaZulu-Natal made the most of moving day to grab a share of the lead with Louis Moolman from Gauteng North.

The Pretoria amateur headed into Thursday’s third round at Plettenberg Bay Country Club leading the field on nine-under, courtesy of a course record nine-under-par 63 in the opening round and even-par 72 in round two.

Scullard lagged eight shots off the pace at the start of the day.

He began chipping away at Moolman’s lead with a birdie at the third hole and a birdie at 18 for back-to-back rounds of 69 earned the Mount Edgecombe golfer a share of pole position on four-under 212 after Moolman returned an expensive 77.

“I battled in the first round and Louis battled today, but that’s golf,” said the 39-year-old Scullard. “We will both be chasing hard in the final round but there are still some guys back there who can overhaul us. It’s still anyone’s championship.”

Local hopes were pinned on Ivan Williams, who was seven shots off the pace at the start of the round. The George golfer was four over for the round, but an eagle finish for a 74 kept the Williams in the mix at level par alongside Naldo Claassen from Eastern Province, who made four birdies on the back nine for a 72. 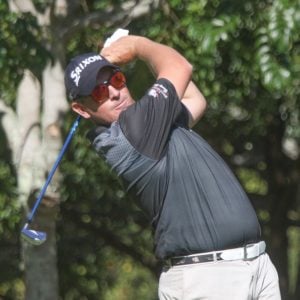 Scullard knew he would have to put some early pressure on Moolman. When the overnight leader bogeyed the third hole, he made his move.

“I holed a 25-footer for birdie and gained two shots,” Scullard said. “Then I birdied the par five (four) and when Louis had a double bogey at five the gap was down to three shots. I made a bogey from the greenside trap at six, but Louis also dropped a shot. I birdied seven and nine and we were tied at five-under going down the back nine.”

Both players bogeyed 10, but Moolman regained the lead with a birdie at 11. Scullard dropped a shot at 13 when he failed to up-and-down from the greenside bunker again.

“I made a good birdie at 14, and Louis bogeyed, so I was back to within a shot of the lead,” Scullard said. “I had a 12-footer for birdie at 15 to get level again, but I missed my chance. At 18, I drove it down the middle. I had a bad lie and I thinned a 4-iron in. It finished right and short of the green, but I hit a great chip to just over a foot and holed the putt for birdie to tie Louis for the lead.

“I didn’t sweat the bogeys and I kept some pressure on Louis and that was key to the round. With four par fives and two drivable par fours, I never got anxious or antsy, I just played to my strengths and that’s what I’ll do in the final round, too.”