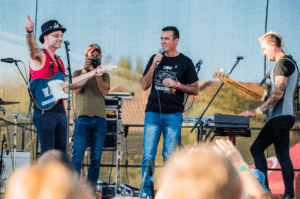 GM Morne Botha losing a bet with the band and having to do a session on stage.

One recurring question at many golf and country clubs and golf estates is how best to manage the balance between fulfilling the expectations of the golfers and those of the non-golfers, in terms of activities held under the banner of being a country club.

Adding angst to this ongoing dilemma is the continued economic down turn. This continuing cycle sees an ever increasing need for every Rand and cent spent to be carefully scrutinised, monitored and justified.

This proved to be case and also the real upside with the postponement of the planned National Golf Day event at Pecanwood Golf and Lifestyle Estate in Hartbeespoort.

Over and above the complexities that go with running any event, in this instance Pecanwood’s management’s challenges were increased by the postponement of the National Golf Day from its original scheduled date.

This sudden change in plans meant that having made bookings in advance for service providers and entertainment (the band the Parlotones being the main attraction in this case), a new strategy would be required to make the most out of the arrangements already put in place.

It is often said that ‘necessity is the Mother of invention’ which happily proved to be the case in this instance. 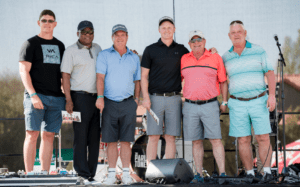 At this point we shall ask a question – ‘what do get when you mix the Parlotones with a lifestyle residential estate and a golf event prize-giving on the Village Green?….. Spring Day at Pecanwood!

Rather than cancel the planned golf day, Morne Botha (GM Country Club) and his team decided to re-invent the day and host the golf prize-giving on the estate’s Village Green, which is adjacent to the clubhouse.

The move resulted in the golf prize-giving becoming an open event, and the change in venue allowed for many more non-golfing guests to be able to attend the event’s other attractions and listen to the Parlotones.

Using a little imagination, the changed strategy was delivered, the event was a huge success and attended by over 1500 people.

Could this be a record attendance for golf club’s prize-giving?……and anyway what a great prize-giving – 15 minutes of formalities followed by 5 hours of official entertainment!

The festivities also resulted in the day ending up later than it should have, as an ‘after-party’ developed down at the estate’s boat club – never a bad thing for the bottom line in F&B terms! 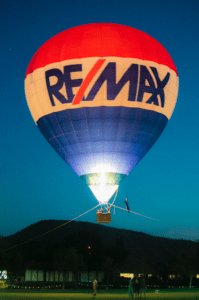 The revised event was open to both the estate’s non-golfers and the public and the inner man was well looked after with 12 food vendors and a beer tent on-site.

The stistical tale of the tape shows that 2 tons of ice were used, while 2000 meals, 800 ice-creams with over 6000 beers and soft drinks being sold.

Parents were also able to take their eye off the ball, as there was a children’s play area with numerous activities and a qulified child minder

The 800 man hours invested in the event proved to be a sound one, both in terms of the attendance and revenues and in the fact that the occasion also proved to be a good marketing initiative for Pecanwood.

The value here was not only in terms of the numbers of attendees, but also with reference to the social media ‘buzz’ generated, all of which resulted in over 140 000 views on Facebook.

Now – who was it who said that golf is boring?

The business lesson that every golf club and golf estate can take from this, should be that change is not necessarily threatening, nor does it need to be daunting.

Cancellation or postponement would have been the ‘easy’ way out of the dilemma. However with a roll up the sleeves approach, a sprinkling of innovation and a little seasoning of good old fashioned common sense, the end result was hugely successful event.

“Personally I try to practise and implement the Growth Mind-set approach in all my work, communications and operations wherever this is possible.

In summary the keys to this are to really to embrace challenges, face and overcome obstacles through persistence, use effort as the route to success, accept, learn and grow from criticism and be inspired by the success of others.

Your business of golf discussions and columns are great in the last respect as they create a platform on which we can share challenges and success stories.

This was exactly the case with the Parlotones event.

Faced with the changes in plans running up to the day, my team and I really had to regroup and work hard on our mind-set.

As you commented, the easy the easy way out would have been to cancel, but for us that was no option!

The short version of the long story is in the result in that we had possibly the best event ever at Pecanwood and honestly in retrospect, if it hadn’t been for the challenges, effort and obstacles we probably wouldn’t have had such a great story to tell today!”

Not only did the revised schedule ‘save’ the original event and give everyone involved a great day out, but it has also laid the foundations for a future annual Spring Day event at Pecanwood, so from the original challenge has come the potential for two events instead of just one!

John Cockayne has been a Professional Golfer since 1977 and is a fully qualified founder member and Life Member of the PGA of South Africa. He is a former Head Professional at Royal Oak, State Mines and Benoni Country Clubs and Director of Golf at Southbroom, during which period he was involved in the organisation of golf tours, numerous professional and amateur tournaments and as a consultant on the Sunshine Circuit.