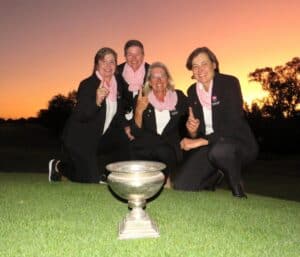 6 May 2022 – Southern Cape swept to victory in the very first SA Women’s Mid-Amateur Inter-Provincial in spectacular fashion at Parys Golf & Country Estate in May.

The Garden Route side kicked their campaign off on a high note, making a winning start by beating KwaZulu-Natal 4 – 2, but it was Boland who edged into the early lead on the A-Section log after routing North West 4.5 – 1.5.

The two teams stayed neck-in-neck over the next two rounds.

Southern Cape defeated North West 6 – 0 in round two to take the top spot in the standings, but the No 1 seeds responded with a hard-fought for 3.5 – 2.5 against Gauteng North to match Southern Cape with 4 points.

After Southern Cape drew against Gauteng North and the match between Boland and KwaZulu-Natal also ended all-square, the two teams were tied on 5 points each going into the final round. Southern Cape had a slight advantage though, leading the games points 13 to 11.

KwaZulu-Natal and Gauteng North were tied for third on 3 points each.

“We played Boland and Western Province in a three-way match on the final day, and we knew we were in for an uphill battle,” said Southern Cape captain and former SA Women’s Mid-Amateur champion Sonja Bland.

“The Boland team is seriously competitive, and they were just as hungry as us to be crowned the first champions of the first SA Women’s IPT. So, we just went into the final day with a winning mind-set, determined to give it everything we had.” 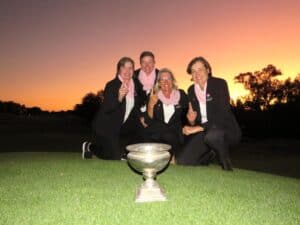 Bland and partner Gaby Gramm also halved against Boland pair Annerie Coetzee and Lizanne Heydenrych, but their 3 & 2 loss to Amanda Ogden & Norma Harrod from Province meant the leaders were still tied after Boland’s Coetzee and Heydenrych beat their Province opponents 1-up.

“We knew we needed to step it up in the singles, and the girls responded massively to pull it through,” Bland said.

“Yvette and Sandra, playing at No 1 and No 2 respectively, really set us up for the victory in their games against Boland. Yvette beat Lizanne 7 & 6 and Sandra defeated Rene 6 & 5. I managed to beat Lynne 3 & 2 and Gaby, our rookie, ensured our winning streak stayed alive when she halved against Annerie.”

The 5 – 1 result against Western Province and 4.5 – 1.5 victory over Boland cemented Southern Cape’s victory on 9 points.

“I couldn’t be prouder of the team. It was a truly amazing week for us. The team came together brilliantly, and we will forever the cherish we made in Parys. What really stood out for me was the spirit and the camaraderie among all the competitors and the fantastic sportsmanship in which the matches were played. 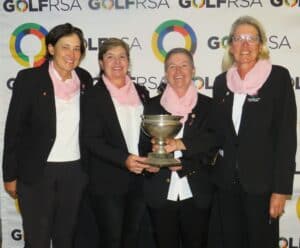 “I want to congratulate GolfRSA and Womens Golf South Africa for getting this event off the ground. I believe the SA Women’s Mid-Amateur Inter-Provincial will hugely boost mid-amateur and senior participation in our Open events around the country. And a big thank you for the incredible hospitality we enjoyed from Parys Golf & Country Estate and the town of Parys.”

KwaZulu-Natal managed to edge Boland for second on games points.