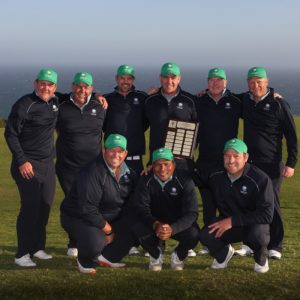 13 October 2017 – Three times they were denied, but Southern Cape is the bridesmaid no more. The Garden Route side routed Free State 8 – 4 in Friday’s final round in the South African Mid-Amateur Inter-Provincial to punctuate a historic promotion with an unrivalled performance at Oubaai Golf Resort and Spa.

“We were determined to make it to the finish line this year, but with the level of competition in the B-Section, that meant going unbeaten for the week,” said manager Billy Valentyn

“Historically, our downfall has been a poor start, so the first two matches were crucial. I asked the guys to bring everything they had and they did. From there they just kept pushing.”

Determined to make the most of their home course advantage to gain a spot in the top tier, Southern Cape laid down an early marker with convincing victories in their double bill against Limpopo and Mpumalanga on day one.

With the B-Section title in the bag, one would have expected the home side to dial it back on the last day, but Southern Cape pushed the gas pedal to the floor to end their week-long campaign in terrific style.

Southern Cape and Free State squared the foursomes, but reigning SA Mid-Amateur champion Almero Theron knocked out number one Nicholas Mitchell 8 & 7 to strike the first blow for Free State in the singles.

“Anton Prinsloo was 1-up playing 18 against Roedu du Plessis in the last game out and we wanted that final point,” said Valentyn.  “Puggy played the hole perfectly. He hit a solid drive down the middle, a three-wood from 248 meters to the front edge and because he couldn’t go for the tucked pin, he hit a conservative chip to eight feet. When Roedu missed the birdie, Puggy got us that last point.”

Valentyn said the victory was down to a dedicated effort from every player over a six month stretch.

“Our preparation started March,” said Valentyn. “The guys competed in all the events here at Oubaai and they a played a lot of individual rounds to come to grips with this course under all conditions.

“When the other teams were badly affected by the wind and rain this week, our guys took on the course and that sealed the promotion for us. I am incredibly proud of the effort from every member of this team. They saw it through from start to finish.

“No team can succeed without support and we had plenty. A big thank you to Rob Thole from Oubaai, for letting us on the course to prepare and for his positive support ahead of, and during the event. Our captain Henk, who did an exceptional job, leading by example, keeping the spirits up and the players motivated. We would like to thank Juan Nel and Hans-Jurie Human, who looked after the logistics and did duty as starters and marshals and Johan Erasmus, who managed our caddies brilliantly.

“On behalf of all the players, I would like to thank the wives and girlfriends who gave the guys as much time as they needed to prepare for this year’s battle. And finally, to my wife and our assistant manager Erica, who looked after all our needs and catered to everyone’s whims; you are a star.

“Mission accomplished and now we get to celebrate this good and proper. We looked forward to finally rubbing shoulders with the top guns in the A-Division next year.”