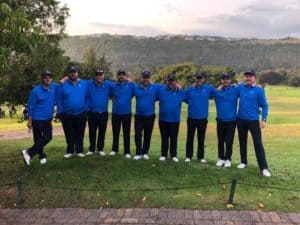 14 May 2019 – Boland thundered into the lead at the SA Country Districts as Southern Cape swept to victory in their opening salvo in the promotion battle at Plettenberg Bay Country Club on Tuesday.

Southern Cape gave the home crowd plenty to cheer about with an 8.5 – 3.5 win against Mpumalanga.

The host union drew 2-all in the foursomes, but stepped it up in the singles. Ian Norgarb set the tone when he knocked out Anton Steenkamp 4 & 2, and Marlo Pienaar beat Darren Neyt 3 & 2 to put the Garden Route side ahead.

The positive result moved Southern Cape to third in the log.

Mpumalanga held on to second spot with 13 game points, but Boland’s crushing 10 – 2 victory over Border catapulted the side to the top of the pile with 4 points and 18 game points. 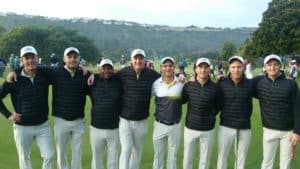 Boland vaulted to the number one spot in the log on day two of the 2019 SA Country Districts on track with successive victories at Plettenberg Bay Country Club; credit GolfRSA.

Boland lost one game and halved another in the foursomes, but the side shifted into high gear in the afternoon session.

The log leaders go head-to-head with Southern Cape on Wednesday, Border play Eastern Province and Mpumalanga has a third round bye.