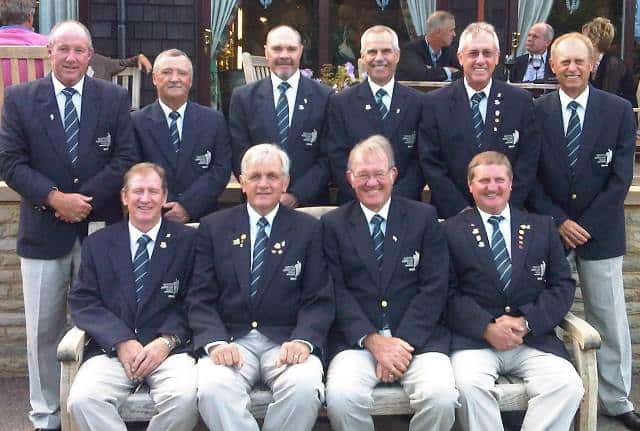 MATCH AGAINST UK SENIORS
As a warm up to the Senior Amateur Open, The South Africans played an International against the UK Seniors at West Hill Golf Club, in Surrey on Wednesday 4th and Thursday 5th August. Each team of ten was split into an “A” and “B” side of five, and the Tournament was played over 36 holes medal, with the top four scores from each round counting.

The final result was a narrow win by the SA “A” side, by one shot, over the “B” side – thanks to a “senior moment” by Steve Cullen on the 17th – where he absent mindedly marked his ball just off the green, and picked it up to clean – when in fact placing was not allowed for the event!!

The course was very dry – there having been no rain for nearly two months, and the parched conditions made scoring difficult – especially with fast hard greens which were exceptionally smooth nevertheless. But playing under these conditions was good practice for the team, as Walton Heath, one of the top UK “heather” courses is a similar layout.

BRITISH SENIOR AMATUER OPEN CHAMPIONSHIPS
The Old course of Walton Heath was a seriously difficult venue – fast tight running fairways, quite a bit of wind, heavy rough in places and hard fast greens. The course is steeped in history, and one just has to venture into the Club House to see the names that had graced the turf over its 130 year history. It was the home of James Braid, who won The Open five times at the turn of the century, and more recently, in 1981, had hosted the Ryder Cup – which at that time was a game between Great Britain & Ireland, and the USA.

156 of the top Senior Amateur golfers from around the world had entered the event. After the first two rounds on Wednesday 11th and Thursday 12th , the field was cut to 60 and ties for the final round on Friday 13th August.

Eight of the team then went on to Essex on Saturday, and played a top county Senior Amateur side at Orsett Golf Club, where they went down narrowly 4 ½ to 3 ½ – partly due to a very tiring week of golf for all.