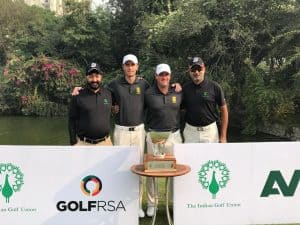 New cap Ruan Botha and Gerlou Roux won 5 & 4 to complete a clean sweep in the day 2 Foursomes against India in the Fellowship Cup.

GREATER NOIDA, India (29 November 2018) – South Africa has the bit between their teeth after sweeping to a commanding lead over India with another crushing performance in the third Fellowship Cup in India on Thursday.

The country’s senior and mid-amateur teams racked up all four points on offer in the first round Fourballs and scored another clean sweep in the round two Fourballs against their peers from the Indian Golf Union to lead the three-day Test 8 – 0.

“Morgan and I lost two holes to birdies, but otherwise we played solid golf and we dovetailed well,” said Van Dyk. “When we needed, we recovered well to halve in pars and we were dormie 3 up after 15. Morgan made a great birdie at the 16th to win the game for us.”

“Another great game against Rishi and that famous cricketer,” joked new cap Camps. “Rishi and Kapil put up a great fight and kept it in play, but we hung tough and eventually took them down.

“We made a few mistakes, but we kept it going and the one difference was that we made quite a few good putts. That gave us the edge and we kept it going. We didn’t give them a chance to get back in the game. The pin positions were once again quite fair and the conditions were great. We combined well, and profited with a nice, solid win.”

Gerlou Roux from Western Province and Central Gauteng’s Ruan Botha made it four-for-four when they mowed down Smarijit Singh and HS Kang by the same margin.

“Gerlou and I made some early birdies at four, six and seven,” said Botha, another debutant in the annual Test between South Africa and India. “Gerlou drove the green at 14, where we made birdie to wrap up the game 5 & 4.

“From the start we wanted to played solid golf, limit our mistakes and make them work for it and that’s what we did. Gerlou and I have huge respect for each other’s games and we combined well, and that definitely worked in our favour. Just a really nice, solid day.”

South Africa will be gunning for their third successive victory in the annual event and the pressure is definitely on India. With eight points up for grabs in the final round Singles, the two Indian teams will have to win all the games to square the Test.