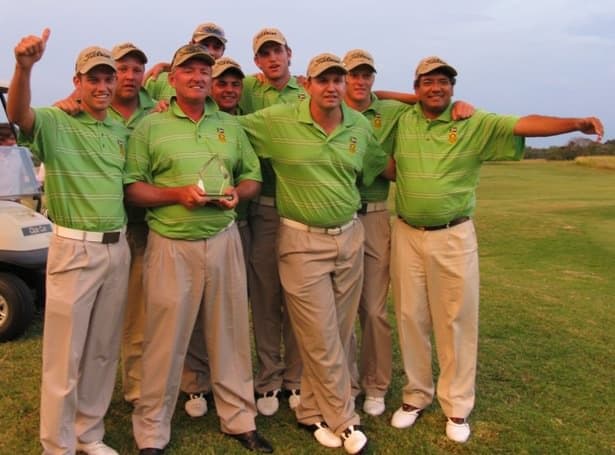 It could be argued that the heavens smiled upon the South African amateur golf team who, after a one and half hour rain delay, managed to overcome a resilient young French team at the end of the second and final day of the eight man test match played at Euphoria Golf Estate, Waterberg, today (Thursday).

Since yesterday’s singles, the South African team were one point down.

Playing in very hot weather, this morning, the Foursomes ended 2 points a piece, leaving the French in front by 8½ to 7½ points.

With South Africa needing to win at least 5 of the afternoon singles matches, a win appeared to be a tall order, especially in the light of the way the French dominated yesterday.

At around 16h00, the heavens opened and play was suspended.

“The odds on South Africa winning at this point were stacked against us,” said Enver Hassen, the SAGA President and Team Manager, speaking after his side’s victory. He explained at this point, there were two matches decided, these being that of Steve Williams, who went down to Edouard Espana (FRA) 3 and 2, and Nicol van Wyk winning his 3 and 2, against Mayel Cheiku (FRA).

“We were down in two matches, up in two and the remaining matches we were all square,” explained Hassen. “The odds still favoured the French,” he quipped.

By 17h30 the weather had cleared and the course drained sufficiently to resume play.

“Ten minutes after the resumption of play it really looked like the French were going to do it,” pointed out the South African Team Manager.

In this time Coenie Bester was disqualified for playing before the signal to resume play was sounded. The Mpumalanga amateur had hit is second shot, on hole 16, into the rough just as play was suspended. He only started the search for his ball when he went back to his position in order to resume play. He fortunately found the ball but rather hastily declared it unplayable and chipped up to the green. The siren then sounded, for the resumption of play, which resulted in Julien Brun of France being declared the winner.

“Ford and O’Riley both lost the first hole played after resumption of play to both move to all square in their matches, the possibility of winning 5 matches was starting to look improbable,” said a smiling Hassen.

Things started turning South Africa’s way when Derik Ferreira fought back from being one down on hole 15 to beat Frederic Ababie 1 up.

“Of the matches concluded at this point both France and South Africa had won two matches each. This meant that we had to win three of the last four matches out on the course.

Unfortunately the next match in concluded with Jake Redman losing to Stanislas Gautier (FRA) on the final hole.

“There was now enormous pressure on the South African players in the final three matches, we had to win them all to take the trophy from France, the defending champions,” pointed out Hassen.

Steven Ferreira, Dean O’Riley and Adrian Ford all delivered, the three players winning their singles matches thus securing South Africa what could be termed a win against the odds.