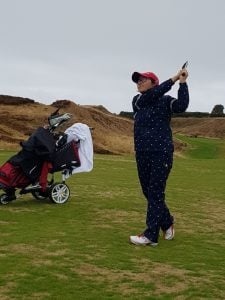 INVERNESS, Scotland (19 September 2018) – South Africa’s top ranked junior Woo Ju Son starts the second round of prestigious Duke of York Young Champions Trophy in the top 10 after a solid performance in the opening round on Tuesday.

Irish junior Joseph Byrne set the first round target at Castle Stuart Golf Links on three-under 69, while Korean junior Heejong Kim – the only other player to break par in brutal weather conditions – clocked in on two-under 68.

Pint-sized Son did extremely well in the high winds and sweeping rain to navigate the daunting layout of in 75 strokes and tied for 10th on three-over with Mikolaj Kniaginin from Poland, Welshman Ben Davies, Katarina Drocarova from Slovakia and Denmark’s Mads Roddik.

The two-time Nomads SA Girls champion tied for 15th in her debut performance last year and was happy with start this year, but felt she let herself down with the flat-stick.

“My ball striking was good and my driver gave me a lot of confidence, so I was a little disappointed that I didn’t score better,” said the 17-year-old from Country Club Johannesburg.

“I didn’t miss many fairways and greens, but on the four greens I missed, I missed putts in the two metre range. I headed out early this morning to spend some time in on the putting green to come to grips with the speed of the greens and hopefully I have a better day with the putter.”

Womens Golf South Africa President Sally Greasley walked with Son and witnessed the tough challenge the 54 juniors from 30 countries faced on the first day of the invitation-only event.

“It was really miserable out there for the juniors and spectators,” said Greasley.

“Woo-Ju played with two young men, one from Puerto Rico and the other from Greece. She made a nice start and narrowly missed a birdie at the opening hole. She was very steady until the fifth, where her tee shot landed in the rough on the left of the par four. Despite a very good chip, she came up short and was one-over after missing the par putt.

“We had a very long wait in the driving rain for the group ahead who had lost a ball and eventually played through. She hit a good drive at seven but left her second short of the green. She had another good chip, but dropped another shot after missing the par putt.

“At the eighth, her drive went through the green. She chipped back and missed a two metre putt to go three over. She parred her way through the turn to the back nine, which runs outwards away from the club. The wind changed direction, but she adapted well and started nicely with a par.”

Son’s tee shot into the par three 11th went wide onto the bank at the back and, despite a great flop shot out of the rough, she missed the par putt and slipped to four-over.

“Woo-Ju kept her composure and made solid pars all the way to the closing hole, a dog-leg par five that takes you back to the clubhouse,” said Greasley. “She hit a great drive but had a “heart in the mouth” moment with her second.

“The green is tucked away on the right with some wicked deep bunkers and a deep drop in front of the green. Her ball made it safely on the edge of the green and her eagle putt from 10 metres stopped inches from the cup. Nice to see her tap in for her first birdie of the day.

“All said, three over was a very good score. It was truly a very difficult day. The fairways are wide, but the bunkers are treacherous, so it was not a day to try and score low. Our game plan was steady golf and to shoot par or maybe one under, but I am very proud of the way Woo-Ju handled the difficult conditions. It was extremely hard to keep everything dry and to keep yourself warm, especially on the front nine where we waited on every hole until we were called through on the sixth.

“The weather gurus are calling for more wind in today’s second round, but the organisers didn’t mow the greens to avoid problems with balls moving in the wind.”
The highly-rated world ranking event is sanctioned by the R&A and hosted by His Royal Highness Prince Andrew, Duke of York.