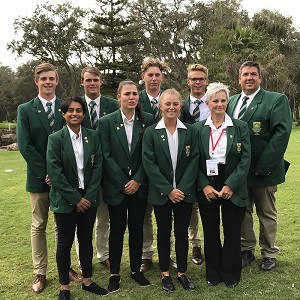 7 March 2018 – Both South African teams made a strong start to the country’s title defence in the All-Africa Junior Golf Challenge in Morocco, despite torrential rain and winds gusting up to 50km per hour that tormented the international field at the Royal Dar Es Salam Golf Club in Rabat on Tuesday.

Kajal Mistry and Caitlyn Macnab combined for an opening round of 164 to edge 14 shots clear of the host nation in the Girls Competition, with Nigeria slipping into third place on 182.

Martin Vorster, Deon Germishuys and Ayden Senger posted 230 to take the top spot in the Boys Competition. The team leads by 18 shots from Morocco and is 25 strokes clear of third-placed Uganda.

Mistry shot 81 and Macnab produced a round of 83 in her debut for South Africa, while the third member of the team Symone Henriques returned a non-counting 85.

“The course is beautifully presented, but the weather was absolutely dreadful,” said Womens Golf South Africa president Sally Greasley. “I was extremely proud of the South African trio. The girls were simply fantastic. They just got on with what they needed to do, grinding away and accepting the good with the bad.

“The Moroccans have been exceptional hosts, and hosted a fantastic opening ceremony where each country was called up onto the stage as their flag was projected onto a big screen. A very nice touch was that all the competitors were introduced individually.

“We were excited to learn that eight girls teams are competing this year, which is two more than in the inaugural Girls Competition last year. Some of the players have never participated in an international competition, and the first day was especially tough on them.

“All the girls started on the eighth hole in the worst of the weather and the back nine is definitely the most difficult. The course held up extremely well with just a few bunkers filled with water. They are growing the rough for the European Tour’s Trophy Hassan in a couple of weeks, so it’s being cut to 70mm and was really penalising, especially in the wet weather. Any errant shots was severely penalised. The pins were challenging, but tempting and a few shots were lost to succumbing to temptation.”

“The course was opened for action just a few weeks ago stood up spectacularly well but nature was hell bent on making the players work for every shot,” said team manager Eden Thompson.

“The unrelenting rain did not let up until about 14h00 and when we got the first tee, the squeegees were already out in full force. The second hole, despite being positioned on a high spot, was filled to the brim with water. The club and rules staff, however, did their utmost to keep play under way.

“Considering conditions, which I legitimately think were worth 4-5 shots over the first six hours of play, the team really did well to keep the score line to what they did. Due to preferred lies, Martin’s one-over 73 did not stand as the club record. He managed his game well and although he dropped a few shots, he kept tight control of his emotions and helped to put us in a very strong position.

“Deon he had a really solid start, but unfortunately as he turned back into the storm, holes nine, 10 and 11 took their toll as he dropped three successive shots before steadying the round. Ayden also got off to a good start despite a couple of three-putts and also couldn’t stop the lost shots on the back nine. On 16 he hit his tee shot down the left side of the fairway, but it must have plugged somewhere and the return to the tee cost Ayden a double bogey.

“Werner made reasonable start but fought a wayward driver, which on this course led to bogeys and he struggled to get back on track. By the 12th hole, it seems frustration got the better of him and some poor decisions allowed for compounding mistakes resulted in an 88.

“The greens were quite slow but they are soft and it makes target golf a possibility. The thick rough resulted in a lot of lost balls and the need to hack the ball back into play. The difficulty of the course means the players’ minds don’t stray from the target too often.

“With the prospect of only “light showers” tomorrow, we will be looking to the team to get into their rounds early tomorrow and slowly eradicated the errors and frustration of today.”