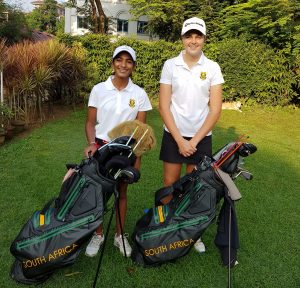 GolfRSA Squad members Kaiyuree Moodley from Gauteng and Kaylah Williams from Western Province ahead of the first round of the IGU All India Ladies Amateur Championship in India; credit GolfRSA.

The 17-year-old Bryanston golfer is nine shots off the pace from local favourite Anika Varma, who was the only player to finish the first round of the 36-hole stroke play qualifier in red numbers.

Williams from Bellville returned an 80 to grab a share of the five-way tie for 16th on 10-over.

“I think it was a pretty tough day for everyone in the field, with the exception of Anika,” said Womens Golf South Africa President Sally Greasley.

“This course is very tight with tall trees lining the fairways, and today the girls had some pretty tight pin positions. The course itself is not too long, but the par threes are a real challenge. The sixth hole measures 174 yards, the eighth 172 yards and the 18th, a fantastic finishing hole, is 196 yards from tee to green.

“Kaylah followed a bogey start with straight run of pars until she reached the eighth. Her drive came up just short of the right-hand bunker, but she was unsure of her chip. She only managed to move the ball three metres.

“That was her downfall because after par on nine and 10, she dropped 11 and had back-to-back double bogeys at 12 and 13. She birdied 15, but played the last three holes bogey, par and bogey and came off the course hugely disappointed.

“Kaylah had nine one-putts on her card, so her problem was her tee shots. On the front nine she was scrambling for pars, and on the back she was just too wayward off the tee and had to play three off the both the 12th and 13th tees.”

Moodley followed a par-par start with a double bogey at the third and back-to-back bogeys at four and five.

“Kai turned five-over, but had a string of pars on the back nine, and was delighted that she didn’t have a single three-putt all day,” said Greasley. “Kai played with 14-year-old Anika, who leads the Indian Open Amateur Rankings, and they had a lot of fun out there.

“After play, both girls went to the driving range to work on various aspects of their games. Kaylah is hitting most of her drives right, which got her into a lot of trouble. She’ll also have a chat with her coach, our GolfRSA Elite Squad Assistant National Coach Anna Becker-Frankel. Hopefully the wayward tee shots will be resolved.

“Unlike previous years, both girls will automatically qualify for the match play stage, given the lower number of entries this year. But they know they are going to have to up their games when it gets to the knock-out stages.”

Please note that the name of the IGU All India Ladies Amateur Championship was changed and advertised as the IGU West Bengal Ladies and Junior Girls Golf Championship. I have been advised that the organisers reverted back to the original name on the eve of the tournament.