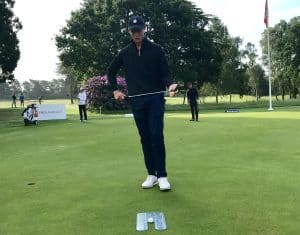 GolfRSA National Squad player Wilco Nienaber giving the putter a workout ahead of round three of the 2018 Brabazon Trophy at Frilford Heath in England; credit GolfRSA.

3 June 2018 – Wilco Nienaber will start this morning’s third round of the Brabazon Trophy in England within striking distance of the lone leader at Frilford Heath Golf Club, while Christo Lamprecht and Therion Nel finished in a seven-way tie for the lead in Saturday’s opening round of the East of Ireland Open Amateur in Ireland.

Nienaber began the second round one off the pace after opening with a five-under-par 67.

The 18-year-old Bloemfontein golfer mixed four birdies with a trio of bogeys to finish in a stack of six players three shots behind pacesetter Jeong Weon Ko.

The Frenchman opened with a 66 and kept hold of the lead with a 69. Ko leads by one from England’s Mitch Waite on nine-under 135 and is two strokes clear of England squad member Charlie Strickland (Ham Manor), Scotland’s Stuart Easton and Germany’s Ferdi Mueller.

Frilford Heath was hit by torrential rain during the first round. The course was rendered unplayable and the tournament organisers were forced to abandon play, with just under half the field still to complete the first day’s play.

Matt Saulez was in the clubhouse with a 73, but Malcolm Mitchell had to return to complete his first round. Saulez carded a second round 70 to finish at even-par and Mitchell, who completed the first round in 73 strokes, joined Saulez on 144 after posting 71 in round two.

As things turned out, it was one agonising stroke too many.

Due to the delays over the first two rounds, the tournament committee amended the cut from 60 and ties to 45 and ties. The KwaZulu-Natal pair, who were well inside the original cut of one-over, had to join the other casualties when the number fell on one-under.

South African Chris Woollam made it to the last two rounds on Sunday, though.

The 2018 Sanlam SA Amateur finalist, coming off a tie for fifth in the Flogas Ireland Open Amateur Championship a fortnight ago, also opened with a 74. The Durban Country Club golfer had a double bogey at the par four 16th, but fired five birdies to make the cut on the number.

Over in Ireland, Lamprecht and Nel laid down a marker on a balmy day in Baltry.

After Nel finished 13th and Lamprecht 54th in the Flogas Irish Amateur Open at Royal County Down, the pair played both courses at Carton House and the European Club with the GolfRSA National Squad to prepare for the Baltray Links at County Louth.

And the experience appears to have paid off.

Nel from Bloemfontein made four birdies on the bounce from the second and added another brace of birdies at 15 and 18 for a flawless six-under-par 66.

Lamprecht from Southern Cape had a rather more adventurous trip around the 7,031 yard (6,429 metre) layout.

On a day when 46 players broke par, fellow National Squad members Clayton Mansfield and Jayden Schaper also finished in red numbers with respective rounds of 69 and 70. Mansfield from KwaZulu-Natal will start the second round in joint 16th and Ekurhuleni’s Schaper will be looking to improve on a tie for 23rd.