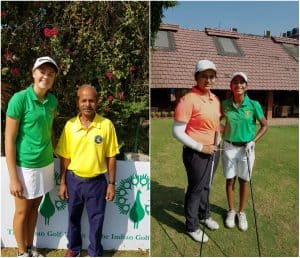 Kaylah Williams and Kaiyuree Moodley ahead of the first round match play at the 2018 IGU All India Ladies Amateur Championship.

KOLKATA, India (29 November 2018) – Kaiyuree Moodley and Kaylah Williams both rallied brilliantly to cross the first hurdle in the match play stage of the 2018 IGU All India Ladies Amateur Championship at the Tollygunge Club golf course in India on Thursday.

“Kaiyuree went 1-up on the second, but lost the third and the match was tied until she holed a great putt at 13 to take the lead again. She slam-dunked an eagle at 14 to go 2-up and a good drive and great approach on 16 set up another birdie opportunity. She holed the putt to go 3-up.

“Her opponent drove it into the hazard on the left at 17, and her penalty drop allowed her just enough room to punch out onto the fairway. Kai hit a lovely straight drive up the fairway, was on the fringe for two and chipped it to give. Game-over.

“Kaylah was 3-up through six. She cruised along, hitting lovely straight drives, but her opponent held her own and they halved the next seven holes in pars. Kaylah never looked uneasy or uncomfortable and she certainly put pressure on her opponent.  Her game ended on the 14th hole after a great second shot into the green which left her with a short putt for par.

“I was extremely proud of both girls’ determination to up the ante and win their matches. Off the course, they have both made several friends and, as the only “foreign” team, they are much in demand for interviews and information pertaining to golf for girls in South Africa.

“They are both up against strong and experienced players and sadly, if they both win their matches in the morning, they will face each other in the third round on Friday afternoon.”

“We are both over the moon with the way we played,” said 17-year-old Moodley from Gauteng.

“My match was tough. My opponent kept her spirits up and made very few mistakes. I had to fight to square the match until we got to the 13th hole. Then I won four holes in a row to win.

“My highlight was the eagle at 14. It’s a medium length par four and I had a grip-down 9-iron into the green. It went straight into the hole, no bounce. It broke cup, but it really boosted my confidence. It was great to have Kaylah and Aunty Sally there cheering me on. My next match will be another tough one, but I will just stay positive and patient and remember how far I’ve come already.”

Williams from Western Province was delighted to have her groove back.

“I really struggled off the tee the first two days,” said the 16-year-old from Bellville.

“I came to India and I lost my groove and I didn’t feel confident about my game at all. It all changed today. I hit a lot of fairways and greens and if I missed a green, I almost always guaranteed myself an up-and-down to save par.

“I won the first two holes, lost the third but won four, halved five and won six. Over the first two rounds, I doubled the 12th hole twice, but today I hit the fairway and chipped in for a birdie, which really gave me a real lift. I had a two-putt to win on 14 and I told myself to rather guarantee the win. I hit the fairway, hit the green and made the two putts to win.

“I was thrilled to be there when Kai made her eagle. It was so special to share that with her. We both face tough matches tomorrow, but we are feeling positive and strong and we’ll do our best to pull it through.”

PHOTO 2 – South African Youth Olympian Kaiyuree Moodley with her first round opponent Hunar Mittal from India ahead of the match play stage at the 2018 IGU All India Ladies Amateur Championship in India; credit GolfRSA.