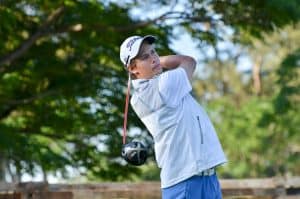 Tyran Snyders from Western Province opened up a two shot lead in the opening round of the Nomads SA Boys Under-19 Stroke Play at Humewood Golf Club on Monday; credit GolfRSA.

25 March 2019 – Tyran Snyders from Western Province made a statement of intent with an opening five-under-par 67 to lead the first round of the Nomads SA Boys Under-19 Stroke Play Championship at Humewood Golf Club on Monday.

Only nine players managed to break par on the opening day when the 128-strong starting field were subjected to all four seasons in the 72-hole qualifier for the Match Play stage in the Bay.

The afternoon session teed off on the wet and windy side of the draw and the three-time Bridge Fund Managers Junior Series winner had to navigate his way around the championship links layout in sweeping rain and a strong wind.

Snyders wiped out a bogey at the third with an eagle at the par five seventh and a brace of birdies at eight and nine took him through the turn on three-under.

The Durbanville golfer birdied all three par fives coming home – the 11th, 15th and 17th holes – to offset his only other bogey on the day at the par four 13th on his way to setting an unchallenged clubhouse target.

Former Nomads SA Boys U-13, U-15 and U-17 champion Casey Jarvis made a solid start in his bid for a ‘grand slam’ of SA Boys titles. The Ekurhuleni golfer turned one-over, but a trio of birdies from the par five 15th saw Jarvis clock in with a two-under 70.

Malan Potgieter from Kirkwood Golf Club led the local challenge with a one-over 71.