Snowed in on the journey to the Annika Invitational!

The last thing the team of Bertine Strauss and Connie Chen travelling to the Annika Invitational in Orlando needed, was a 12 hour diversion to New York while Washington Airport was cleared of the 18 inches of snow.

Manager Erica Lefson reported that after leaving South Africa late because of a storm over OR Tambo Airport, as they approached the USA coastline, they were advised that Washington Airport was closed due to the snow storm and they were diverted to New York.

After sitting in the plane for an hour, they disembarked and had to endure a long queue at passport control before being told that they would have a 12 hour wait before travelling on to Washington.

Erica, not known for taking such news lightly, trotted off to try a few options and eventually with the assistance of her gold voyager card, managed to transfer to Americen Airlines at no extra cost to fly directly to Orlando. 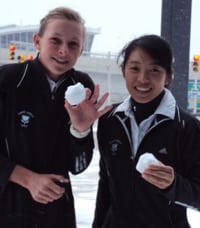 Bertine and Connie however, not having seen snow before, thoroughly enjoyed the experience and left their manager to sort out the arrangements.

The second Annika Invitational will be played at the Reunion Resort in Orlando, Florida fromn 12 to 15 Februaty. At the inaugural event played in January 2009, the same two players represented South Africa and received Junior Protea colours.