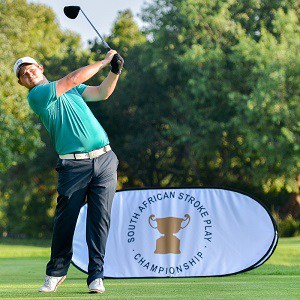 South Africa’s Keaton Slatter set a blistering pace in the first round of the South African Stroke Play Championship with an opening eight-under-par at Pecanwood Golf and Country Club; credit Ernest Blignault.

6 February 2018 – A superb eight-under-par 64 helped Keaton Slatter to surge past the tournament favourites into the top spot in the first round of the South African Stroke Play Championship on Tuesday.

On a low scoring day at Pecanwood Golf and Country Estate, 57 players in the 144-strong field broke par but no-one revelled more in the sunny conditions than the 23-year-old from Royal Johannesburg and Kensington.

Reigning Mpumalanga Open champion Louis Albertse and 16-year-old Ryan van Velzen sit two shots off the lead, while Edgar Catherine made a tidy start to his title defence with a five-under 65.

The Frenchman tied for eighth with, among others, local favourite Theunie Bezuidenhout, South Africa’s number four Matt Saulez, Scotland’s Callum Fyfe and Oliver Gillberg from Sweden, the top ranked player in the field at number 10 in the World Amateur Rankings.

Slatter got off to a flying start after a bogey at the first, firing six straight birdies to get to five under.

A further pair of birdies at 12 and 13 and a tap-in birdie at the par three 16th took him to the top of the leaderboard.

“I had 129 metres into the first green, and hit a soft wedge in but it finished in the bunker,” said Slatter, who ranks 42nd on the Open Amateur rankings. “I hit a decent trap-shot, but missed the par putt. I told myself that’s the bogey of the day out of the way and just kept going.

“At the second I hit a good approach to 18 feet and made the birdie putt and at the third, I drained a 25-footer for birdie. That really gave my round some momentum and I was able to keep it going through the turn, right up to the end.

“It’s really great to make a solid start and to give yourself a decent chance in a championship of this stature. There are a lot of top international players here this week, so the goal is to keep myself in a strong position to challenge in the final round.”

Du Preez from Gauteng North, one of the late finishers, was equally pleased to finish near the top.

“I hit the ball really well and the putting stroke was there,” said the Pretoria Country Club golfer. “Unfortunately I gave two shots back at 18 and eight, but I made a lot of birdie putts and the eagle at five was the icing on the cake. I was looking forward to that hole all day. I hit a great drive and I had 155 metres left to the pin. I hit eight-iron stiff and boxed the putt. The course set-up was really fair and the greens were putting just beautifully, so I’m not surprised to see such a bunched leaderboard. Makes it very interesting with three rounds to play.”

Aborg and Basson played together and the two hit it off immediately.

“We had a lot of fun out there,” said the 18-year-old from Eslov. “Christiaan kept me on my toes. If you can keep it play around this course, and avoid the bunkers, the birdies are there for the taking.”

“I trailed Ludwig but I answered all his birdies. The putter was hot and the longer we played, the bigger the holes got. The weather was perfect and we just enjoyed ourselves out there.”

Nienaber, the last player to clock in at seven-under, also had just one blemish on his card.

One of the longest drivers on the local amateur circuit, Nienaber was among the last players to finish and also clocked in with just one bogey on his card.

“The course played great and the slight breeze this afternoon didn’t really bother me,” said the 17-year-old from Bloemfontein. “The conditions were perfect and I hit the ball very well from tee to green. I’m exactly where hoped to be after the first round; now I just need to keep this momentum going.”