Zwartkop senior William Skinner will carry a one-stroke lead into the final round of the SA Senior Amateur Championship at Durban Country Club on Friday; credit Ernest Blignault.

17 October 2019 – William Skinner fired an eagle and three birdies on his back nine to open up a slender one-shot lead after another day of tough scoring conditions in the SA Senior Amateur Championship.

Skinner and defending champion Morgan Phillips were only two players in the 142-strong field to break par in the stiff breeze at Durban Country Club on Thursday.

Skinner signed for one-under-par 71 to move into pole position on one-over 145.

“I got rewarded for playing some good golf today, which is nice when it happens. I hit 16 greens in regulation, so it could have been a lot better, but the flat-stick didn’t come to the party today,” said the 59-year-old management consultant.

“I drained two putts of substantial length, but when it came to the shorter ones, the putter wouldn’t cooperate and I missed four five-footers. It was a little disappointing, but I had a lot of fun with my playing partners and anytime you break par at Durban Country Club it has to be a good day.”

The eagle on the par five third and the birdies coming home highlighted his round.

“I had an afternoon start and the wind was already making its presence felt,” Skinner said. “We teed off in a gusting two-club wind, but I made a nice start with back-to-back birdies on 11 and 12. But I had three bogeys before the turn and dropped another shot on the first to go two-over.

“I hit a good drive down the third and took 3-wood from 230 metres in. The ball pitched 20 feet from the pin and I drained the eagle putt. I hit two long drives on the fifth and sixth holes, about 50 metres short of the green. I holed a 12-footer for birdie on the fifth and hit it stiff on the sixth.”

The Zwartkop golfer got his round back to level-par with a two-putt birdie after driving it into the fairway bunker on the par five eighth, but a mental error on his final hole cost him a two-shot lead.

“I pulled my drive into the trees left on the ninth,” said Skinner. “All I could do was punch out and then I didn’t up-and-down to save par. It would have been nice to have a two-shot cushion, because the leaderboard is tight. It’s anybody’s championship really, especially on a course like this, but I’ll give it my best shot on Friday and hopefully the putter warms up.”

Greg Woodbridge from Atlantic Beach Links made a bogey-bogey start, but got his round back to level par with successive birdies on the seventh and eighth holes. The 2019 Western Province Masters champion fired 10 straight pars to finish alone in second on two-over. 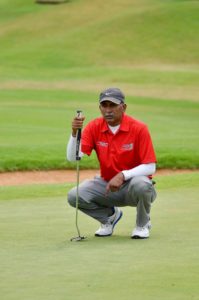 Defending champion Morgan Phillips is just two shots off the pace at the 36-hole mark of the SA Senior Amateur Championship at Durban Country Club on Friday; credit Ernest Blignault.

Meanwhile Phillips begun to slowly work his way up the jam-packed leaderboard.

The Victoria Country Club golfer reeled in three birdies on his outward loop to turn level par and he offset a bogey on the par four 11th with a pair of gains on 13 and 14 to get to one-under and he will start the final round in third and two shots behind Skinner.

“I struck it well in both rounds, but the chipping and putting was really much better today than in the first round,” said the 2018 champion. “I hit it close on the fourth and made the birdie, chipped it close on the sixth for another birdie and chipped in for birdie on the seventh.

“I also think that we got used to the wind. It blew from the same direction and it was similar strength on both days. The forecast is calling for the same wind direction – north, north east – which will help, but not as strong,; just around 33 km per hour. I think the fight will go right down to the wire. I will go out there and play the course and see where it leaves me.”

Bochumer Golf Club member Ulrich Schulte also threw his name in the hat with a round of 75.

Overnight leader Stephen Johnston had half a dozen bogeys on his way to a second round 78, but the Ruimsig golfer is not out of it at five-over. He tied for seventh with Christiaan Pienaar (74) from Humewood and Glendower’s Ramon Rahme (75).

Henry Trevena from Royal Cape and two-time Senior Players Champion Andre van Dyk from Langebaan posted respective rounds of 73 and 72 to round out the top 10 on seven-over.