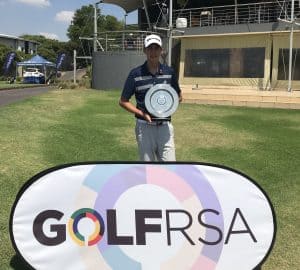 RANDBURG, 14 December 2018 – Sam Simpson underlined his billing as one of South Africa’s emerging young stars when he stormed to a five-shot victory in the Joburg Junior Open at Randpark Golf Club on Friday.

The 16-year-old Bellville golfer announced himself in July when he captured his first title on the Sunshine Tour Junior Series in the Tshwane Junior Open at Irene Country Club.

A month later, Simpson travelled to Italy with the GolfRSA National Squad team, where he impressed with a runner-up finish in the highly-rated Reply Italian Under-16 Championship.

The Western Province junior had another chance in the Africa Junior Open in August, but lost out to 2018 Nomads SA Boys U-15 and U-17 champion Casey Jarvis at the Fish River Resort.

He tied for fourth in the Cape Town Junior Open in October, but went back to his winning ways in November. Simpson outperformed some of the country’s top amateurs with a winning performance in the Bobby Locke at Parkview Golf Club.

It was his first victory on the Open Amateur circuit and Simpson arrived at Randpark for the season-finale busting with confidenc.

“It was a little daunting at first, but I felt really good about my game,” he said. “We played the course the same way it was set up for the pros in the SA Open. There were some tricky pins and you really had to manage your game. I struck the ball really well over both days. I hit a lot of fairways and greens and I limited my mistakes. That was key to my win.”

Simpson fired 11 birdies and only dropped two shots in the 36-hole tournament.

An opening four-under-par 68 on the Firethorn Course netted him a share of lead with Sam McKenzie from Gauteng and reigning East of Ireland Amateur champion Christo Lamprecht.

“Sam has been playing really well lately. Christo is always dangerous and Jayden (Schaper) was also in the mix at one-under. Christo and Jayden are good closers, so I knew it would be tight.”

Simpson made a fast start with birdies at the second and third to surge into the lead.

Lamprecht kept in touch, fellow GolfRSA National Squad member Cole Stevens joined the chasing pack with a birdie start and eagle at the par-four third and Schaper got off to a blistering start. The country’s top ranked junior eagled the first and birdied two, three and five.

“It was still pretty tight after nine holes, but I pulled clear with a birdie at 10,” Simpson said.

“Christo, Cole and Jayden were still in it, but I knew if I hit greens in regulation, I could win and that was my aim over the last three holes. Unfortunately my approach shot on 18 pitched on the green and rolled in the bunker. I worked it out of the trap, but I short-sided myself and ended with bogey.”

“Before the final, I was always nervous playing in local tournaments,” he said. “Then I qualified for the final and tied for the lead with Deon Germishuys, who won the Sanlam SA Amateur. I lost out on a trip to the Junior North and South at Pinehurst when Deon chip-in for birdie at the last hole.

“But the South Final at showed me that I could compete against the best juniors. I beat Deon to win the Tshwane Junior Open. Every experience prepares you for the next challenge and it builds your confidence.

“I am really excited to finish the season so strong. It’s great to sign off on a high note and to set the tone for next year.”