27 March 2019 – Sam Simpson from Western Province produced a grandstand finish at Humewood Golf Club on Wednesday to claim a three-stroke victory in the Nomads SA Boys Under-19 Stroke Play Championship.

Less than a fortnight ago, the GolfRSA National Squad member anchored the South African team in their 21st consecutive victory in the All-Africa Junior Golf Challenge in Botswana.

The 16-year-old sounded a loud warning the 100-plus field heading to Port Elizabeth when he won the Boys Individual Competition by nine strokes.

Simpson lagged one off the pace at the start of the final day, but overtook 36-hole leader Casey Jarvis with a birdie start to the third round.

“The wind was probably at its strongest when we arrived for the last two rounds and I knew it would take a fast start to have a chance,” said Simpson, who posted a winning total of 13-under par 275.

“Casey dropped at the first and I birdied and that was key to the win. I made a couple of birdies to take a three shot lead into the last 18, but the wind had died down quite a bit and I knew the guys in the chasing pack would go low in the afternoon.

“Casey, Jayden (Schaper) and Tyron played great golf in the final round to reel me in. I didn’t play badly, but it was a lot of fairways, greens and two-putts. It was frustrating, because I gave myself birdie chances and couldn’t convert. Then I birdied 11 and chipped in for another birdie at 12 to go two shots ahead.

“I could hear people clapping up ahead and I knew Jayden was on a run. So I just kept my head down, stayed patient and made sure of my pars.” 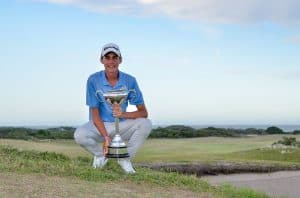 Simpson birdied 15, dropped a shot at 16 and birdied 17 to start the final hole with a three shot lead.

“Jayden had three birdies in a row from 13 and a birdie at the par five (17), so the birdie at 17 was a big one for me to give me some breathing room. I followed a great drive down 18 with two scrappy shots, but holed a six-footer for par to seal the win,” Simpson said.

“I’m pleased with how I handled myself out there on the last day and really happy to call myself a Nomads SA Boys winner. It’s a huge honour. And I’m looking forward to the match play and the possibility of the double.

“It’s going to be a tough couple of days, because it’s a different format and there are no second chances in match play. No-one who made the top 32 is going to give anything away, so I’ll have to push the reset button and work hard for it.”

Fifteen-year-old Jarvis, hoping to become the only the second junior to win all four Nomads SA Boys titles, closed with rounds of 72 and 70 on the final day and had to settle for a tie for second on 10-under with Schaper, the only player to have achieve the SA Boys ‘grand slam’.

The country’s number one ranked junior signed off with rounds of 71 and 69.

The Ekurhuleni pair finished one shot clear of first round leader Snyders from Western Province, whose successive rounds of 71 earned him fourth on his own.

Meanwhile Judd Sundelson, Tobias Jan de Flamingh and Oliver Goldhill survived a seven man play-off on 12-over for the last three spots into the top 32 for the first round of the match play stage.