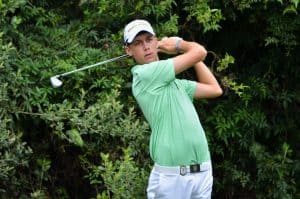 November 2020 – GolfRSA National Squad member Sam Simpson got back to winning ways with a comfortable five-stroke victory in the Eastern Province Stroke Play Championship at Wedgewood.

The 18-year-old matriculant from Western Province Golf shot rounds of 64, 65 and 70 to claim his first win since he claimed the Proudfoot Trophy at this year’s Aon South African Amateur Championship.

In doing so, Simpson also managed to do what no other golfer has done since 2016, and that is edge local favourite Kyle de Beer in his home championship. 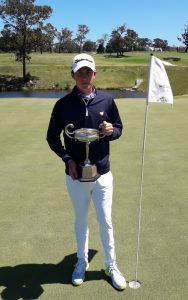 “It feels really good to get another win,” said Simpson, who is busy with his matric final exams. “There was wind predicted for the final round in the afternoon, so I knew that I had to go low in the morning round and I was able to do that.

“Even with a six-shot lead, anything can still happen, but I knew that if I played solidly it would force Kyle and Werner [Deyzel] to have to go really low to catch me.

“I didn’t get off to the best of starts, but I kept it steady until the end.”

The Durbanville Golf Club member has no intention of turning professional any time soon and has committed to playing on the amateur circuit for the next couple of years until he is ready to try his hand on the professional circuit.

“I played in the SA Open last year and realised that I still had a lot to learn before I could compete at that level,” he explained.

Simpson will have another crack at the Freddie Tait Cup in the 110th SA Open at the Gary Player Country Club at Sun City in December . Then he faces the prospect of a full year of amateur golf, including the GolfRSA National Squad UK Tour in 2o21.

“I’ve set myself a few goals,” he said. “I want to get to No 1 in the ranking, play well enough overseas in the big events and get into the top 50 of the World Amateur Golf Ranking.”