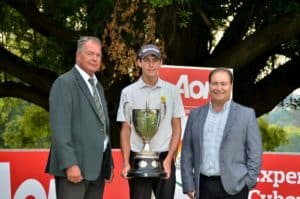 17 February 2020 – He called it possibly the best two-iron of his life, and it set up what turned out to be a decisive eagle for Sam Simpson as he went on to win the Proudfoot Trophy for topping the 36-hole stroke play qualifier for the match play stage of the Aon South African Amateur Championship.

After making three birdies in the opening seven holes to pull himself into a share of the lead, which stood at 10-under after Casey Jarvis set the clubhouse target in the morning at Royal Johannesburg and Kensington Golf Club in the morning, Simpson eagled eight to go into a lead which he never relinquished as he made one more birdie on his way in after the turn.

“I took three-wood off the tee on the eighth hole just to put myself into position,” said the 17-year-old Western Province golfer. “I had 245 to the flag and I hit a great two-iron to about three feet and rolled that one in for eagle. That was really cool.”

There are some big names on the Proudfoot Trophy, including Major winner Trevor Immelman, European Tour winners Brandon Stone and Haydn Porteous and more recently, former Freddie Tait Cup winner Jovan Rebula. “It’s great,” said Simpson. “I haven’t really thought about the names that have been on it, but it will be really cool to see my name on it in the future.”

The East Course at Royal Johannesburg is a stern test and, for Simpson to have gone bogey-free as he held on to his three-stroke edge over Jarvis, countryman Christiaan Maas and England’s Joseph Long was an impressive feat.

He felt his putter let him down somewhat in last week’s South African Stroke Play Championship which Jarvis romped away with. “It was not the best putting performance from me last week,” said Simpson. “This week, it’s only two weeks done, but the putter was definitely rolling and I’m looking forward to more like it in the match play.”

Jarvis got it to 11-under as he looked to be on his way to a possible second title inside two weeks, but he incurred a penalty stroke for inadvertently marking and lifting his ball which was just on the edge of a green. That saw him finish at 10-under, and although that was three strokes back, he’s in a good space going into the match play.

“I played some good golf out there,” said Jarvis. “I’m really confident heading into the match play. I’m pleased for my friend Sam for winning the Proudfoot – he deserves it because he’s been playing very well lately.”

Long’s seven-under-par 65 will be the new course record at Royal after the course underwent some extensive renovation and changes ahead of its reopening last year in January.

The Englishman started his round with a birdie on the 10th, which could have disheartened him, but didn’t. “I had a good bounce-back after the bogey with two birdies in a row,” said Long, “and then I had another bogey. I dropped the eagle on 18. It was two great shots in and I holed an 18-footer. Then I hit another two good shots and holed a six-footer on one. The putter was just on fire, really.” 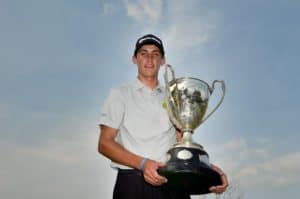 As the top 64 players go into the match play, the East Course is going to ask some questions of them as they scheme to bring down an opponent, rather than trying to overpower the course.

“There are some really demanding tee shots that you have to step up and commit to. There are tighter fairways. I prefer that and I’m mentally prepared for that,” said Long

For Simpson, the satisfaction of winning the Proudfoot Trophy helps his state of mind going into the shoot-out which is match play. “I started yesterday with a nice seven-under which put me in a good position to go out there today and shoot a low number,” the 2019 Nomads SA Boys U-19 Stroke Play champion said. “I just have to put things into perspective and tell myself that it’s only two rounds done. There are a lot of match play rounds left. I’ve just got to focus on going out there tomorrow and playing the best I can.”

The final spots for the first round of the knock-out stages was decided in a 10-man play-off on two-over-par 146, with Frenchman Elliot Anger and South Africans Siyanda Mwandla and Christopher Gutuza coming up trumps.