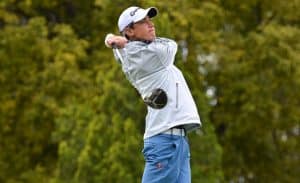 Samuel Simpson from Western Province fired a seven-under-par 65 at Middelburg Country Club to lead the first round of the Nomads SA Boys Under-17 Championship; credit Ernest Blignault.

4 July 2018 – Rising Western Province star Samuel Simpson threw down the gauntlet in the first round of the Nomads SA Boys Under-17 Championship when he blew away the rest of the field with a red-hot seven-under 65 at Middelburg Country Club on Wednesday.

Simpson has been making noise on the junior circuit since his Bridge Fund Managers Junior Series play-off win at Strand Golf Club in September last year.

He backed the victory up with a tie for second on the series at Kingswood and finished the 2017 season with top five finishes in the Metropolitan Open and the PAT Finals. Picking up where he left off, he kicked off 2018 with runner-up finishes in the season-opening Nomads National Order of Merit at Royal Durban Golf Club and the Western Province Durbanville Junior.

Simpson went into the Bridge Fund Managers Junior Series South Final in April following a third place finish in the Bellville Junior Open and look good to clinch the trip to the Junior North and South Championship at Pinehurst, but fellow Western Province junior Deon Germishuys chip in at the final hole to win by one stroke at King David Mowbray Golf Club.

While Germishuys and North finalist Nikhil Gopal travelled to the Unites States last week, Simpson made hay in George.

He carded rounds of 74, 69 and 67 to finish third in the Dimension Data Junior Open and brought that form to Mpumalanga. Having reigning Reply Italian Under-16 champion Martin Vorster for company in the first round was the catalyst that helped Simpson to take it to the next level.

“Playing with Martin definitely made me pushed myself harder,” said Simpson, who overcame a bogey start at the 10th with back-to-back birdies at 16 and 17.

“I didn’t hit a great drive to start and I was under the trees on the left. I missed the green short and couldn’t up-and-down for par. I went to the second hole not feeling great.

“I thought if I could par my way to the par fives (16 and 17), I could hopefully turn under par and I pretty much did that. I had an easy two-putt birdie at 16 and I laid up at 17, hit a decent wedge in and made my birdie.”

Simpson made the rest of his birdie haul over his last nine holes.

“I wasn’t unhappy to turn one-under, because the back nine is definitely not the scoring nine,” said Simpson, who knocked it in the hole at one, two, four, six, seven and eight.

“I made a bunch of birdies coming home. I was hitting it close and making a lot of six to eight-footers. The birdie at 17 was probably the best. I had a 20 foot down the hill from the left and I was able to drain that and I was two shots clear going down nine.

“I hit a good drive and a great second in. I was going for 29, but unfortunately my putt missed on the low side. I have to credit Martin. He encouraged me during the round and I definitely pushed harder playing with him.”

Vorster, coming off a runner-up finish in the Dimension Data Junior Open, did his best to keep pace with Simpson, but the Southern Cape golfer came up two shots shy. He had to settle for joint second alongside Kieron van Wyk from Ruimsig and Blue Valley’s Alessio Graziani.

Yurav Premall from Glendower and Parkview Golf Club’s Cole Stevens both carded three-under 69s and Marcus Taylor from Dainfern and Benoni junior Ryan van Velzen rounded out the top 10 with rounds of 70.

Click HERE to view the scoring from the Nomads SA Boys Under-17 Championship.