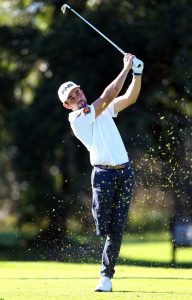 Seriously, this may just be a contender for the greatest round of golf ever played in South Africa – Spain’s big-hitting, go-for-broke Juan Postigo shooting a remarkable three-under-par 69 while balancing on his only leg to take the first round lead in the Canon South African Disabled Golf Open at King David Mowbray Golf Club in Cape Town Monday.

The vast majority of leg amputees competing at this level use sophisticated prosthetics, which allow them to balance, get more feel and establish a more stable, power base.

Not the 21-year-old Postigo.

“I don’t like prosthetics,” he said after his five-birdie round, which handed him a one-shot lead over defending champion Chad Pfeifer from the United States. “I was born without a leg, so I had to learn balance from a young age. The prosthetic doesn’t feel natural to me.”

To shoot a 69 around a championship golf course is a special feat. To do so while balancing on one leg is absolutely remarkable. And to able to regularly hit 300-yard drives is, quite frankly, astonishing.

The smiling young Spaniard birdied all four par fives in his round, getting up in two shots at two of them and chipping and putting at the other two to make his fours. And he doesn’t plan to hold back in Tuesday’s second round.

Pfeifer, meanwhile, does use a prosthetic, is also wonderfully talented.

After winning last year’s edition of the Canon South African Disabled Golf Open in his debut appearance last year, he also collected silverware at the World Disabled Open in Portland, Oregon and added a third US National Amputee Championship trophy to his haul.

The former US Army corporal shot two under 70 after he missed two-footer for par at 18, which cost him a share of the lead.

“I had a pretty decent score, but I felt I was scrambling all day because I wasn’t hitting the driver 100 percent,” said Pfeifer, who arrived in South Africa late on Saturday afternoon. “I was feeling the effects of a 30 hour flight from Boise, Idaho, but I was never in a lot of trouble.

“I putted pretty well. I made a couple of long putts for birdie – one of about 25 feet. At the four short holes I had a good look at birdie each time and I made two, but the other two putts just lipped out. All in all, not a bad day considering I wasn’t at my best.”

“I had an up-and-down sort of day that featured six birdies, eight bogeys, four pars and only one leg,” said 47-year-old Bontz, who plays off scratch and aims to become the first amputee to qualify for the Champions Tour in three years’ time when he turns 50.

“Not my normal round. I’m usually super steady, and six birdies should result in a 68, at least. I ended with three straight bogeys and that’s definitely not me.”

Canada’s Josh Williams, who won the title in 2014, is next best on the leaderboard with a 75.

Christo de Jager from the Easter Province leads the South African charge with a 77. The 53-year-old from Uitenhage, who is fondly called “Oupa” and plays off a nine handicap, is celebrating his 10th appearance in this year’s SA Open.

The 54-hole event, which wraps up on Wednesday, runs concurrent with the first three rounds of the World Cup of Disabled Golf.

The American pair have opened up a yawning gap on the other 11 teams vying for the trophy.

Their combined score of even-par 144 sees Pfeifer and Bontz lead by 10 shots from Williams and Bob MacDermott from Canada and is 14 shots clear of the international team of Postigo and Martin Williams from Wales. South Africa’s Rupert Froneman and Herman van Wyk, who shot respective rounds of 85 and 83, are seventh on 168.