Seven amateurs will be teeing up in the first round of the South African Open Championship, over 72 holes stroke play, which commences on Thursday at Pearl Valley Golf Estates just outside Paarl in the Western Cape.

Five of the country’s leading amateurs were invited to participate and a further two qualified yesterday.

The two players who qualified were Jake Redman and Mikhail Tewary. Redman, from George Golf Club, blitzed the Devonvale golf course in 64, eight under par, to finish outright winner one stroke clear of the field. Tewary, playing the other venue, Bellville Golf Club, recorded a five under par 67 to finish 5th tie to claim one of a total of twelve spots qualifiers were playing for to get into in the SA Open.

It was way back in 1959 when an amateur last won the prestigious SA Open Championship, it was well known professional and commentator Denis Hutchinson.

Of the amateurs participating Dylan Frittelli, 18 years old and plays his golf out of Irene Country Club in Gauteng North, is the player who will most likely lead this pack of amateurs. However with a formidable field assembled, which includes player like Ernie Els, Henrik Stenson (Sweden), Tim Clark, who won the Australian Open last week, and Lee Westwood, it will take an exceptional performance to finish near the top of the leaderboard on Sunday.

Frittelli, the talented SA Junior Champion, who is back home on a Christmas break from the University of Texas, where he is on a golf scholarship, said he is well rested and looking forward to the week. “Just come out of exams so I have been practicing every second day or so,” he said after his practice round yesterday.

The No 1 ranked player is playing in the SA Open for the second time. He qualified for the 2006 SA Open Championship played at Humewood Golf Club in Port Elizabeth. He also played the SA Stroke Play at Pearl Valley in February this year, finishing 5th in the windswept competition. “I played the 17th hole 8 over par then, however this time I intend being a bit more aggressive,” he said. 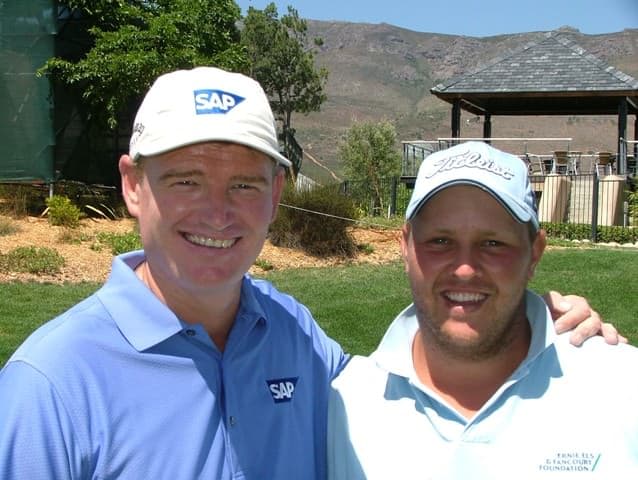 The other player to watch is the tenacious Adrian Ford. The 21 year old Durbanville Golf Club player, who is also a member of the Ernie Els & Fancourt Foundation, won the Eastern Province Stroke Play by eight shots last month. He represented South Africa in the Argentine Amateur Championship, getting as far as the last 16, two weeks ago. While playing a practice round with Ernie Els yesterday, Ford said,” I am really looking forward to teeing up on Thursday. My first objective is to make the cut.”

Cameron Johnston, 38 year old Milnerton Golf Club player, has had a stellar year so far, having won four tournaments which included the SA Mid Amateur Championship. “I am not too happy with my driving,” he said after his practice round yesterday. “I had a practice round with Alan McLean, he out drove me by miles,” complained Johnston. He explained that a slight fade had krept into his drive which he is working on rectifying before tomorrow’s first round.

The first players tee off from 06h30 tomorrow. Johnston and Tewary make an early start, as does Dean O’Riley.

The biggest challenge, other the beautifully prepared and manicured Pearl Valley layout, will in all likelihood prove to be the wind, which is expected to gust up to 30km/hr tomorrow, according to weather forecasts.

The leading amateur on conclusion of the SA Championship will win the Freddie Tait Cup.