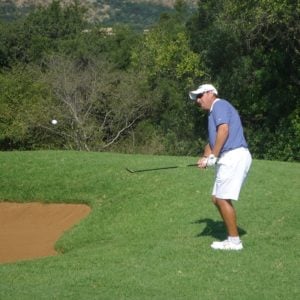 Derek Scullard from KwaZulu-Natal fired a three-under-par 69 to move to third in the second round of the SA Mid-Amateur Championship at Plettenberg Bay Country; credit GolfRSA.

2 May 2018 – Louis Moolman dropped four shots over his last five holes, but the Pretoria amateur still retained the clubhouse lead at the halfway mark of the South African Mid-Amateur Championship.

The 31-year-old Cullinan golfer set the first round target with a course record nine-under-par 63 in perfect scoring conditions at Plettenberg Bay Country Club, but when he teed off with the afternoon starters on Wednesday, a fresh west-south-westerly wind made for a tough day at the office.

Moolman was four under through 13 holes, courtesy of birdies at 15 and one, and an eagle at the par-five fourth, but he ran into trouble at the toughest stretch on the course.

He dropped shots at five and eight and had a double bogey at the par-five seventh to limp home in even-par 72. It was good enough, though, to keep him at the top of the pile at nine-under 135 and he will start the third round with a staggering seven shot lead.

“We set up the course to be challenging but fair, pushing tees forward on the holes into the wind and giving guys scope on the holes that play downwind,” said golf director Cliff Barnard.

“But the wind blew, blowing between 25 and 27 kilometres an hour, made for tough scoring and no-one made a real move on Louis in front. A good score would have been around the 69 mark, but five, six, seven and eight are brutal holes into the wind, especially for the guys finished on the front nine. A lot of players gave up shots in that stretch.”

Local hope Ivan Williams began the second round four off the pace, but the George golfer also fell afoul of seven and eight. He carded a 75 to hold on to second place, but slipped to one-under.

“I hope the wind really pumps to slow Louis down a bit,” joked Williams. “Actually, I had a really steady start. I didn’t do much wrong, but the putts wouldn’t drop. I had seven lip-outs in total, so I really need to get the flat stick warmed up. Unfortunately two loose shots at seven and eight cost me, but there are two rounds left. I never stop fighting until the last putt drops.”

Low rounds were far and few. Nalco Claassen from Wedgewood carded a 71 and Ruan Botha from Randpark also posted an even-par 72.

However, Derek Scullard from KwaZulu-Natal had the measure of the course, especially the tough closing stretch. The Mount Edgecombe golfer posted the low round of the day – a three-under-par 69 – that vaulted him to third on one-under 143.

Scullard made a bogey start at 10 and dropped another shot at 12, but turned level par after birdies at 13 and 18 to turn level-par. Down the back, the 2017 GolfRSA Mid-Amateur of the Year had two more bogeys at three and eight, but cancelled those with birdies at two, four, seven and nine.

“I played the course for the first time in round one and probably played a bit too defensively, but it helps to get to know the layout,” he said. “If you hit it in the wrong spot on some of the greens, you struggle to up-and-down for par and that happened a few times in the first round.

“I felt comfortable using the driver a lot more today and the putter behaved better. I’ve been struggling with the putter in the last few months, but I’ve gone back to my old Odyssey T-Blade and it seems to be working out for me.

“Louis is miles ahead and he is a solid player, so it will take two really good rounds to catch him, but I like a challenge. I think it will probably all come down to the weather over the last two days.”