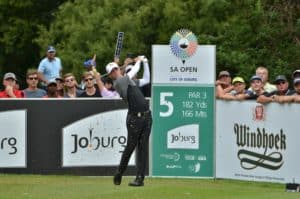 JOHANNESBURG, 11 January 2020 – Amateur Jayden Schaper is relishing the crowd support at the SA Open hosted by City of Joburg, and with a solid third-round two-under 69 to move to 12-under in the third round, he will be using that atmosphere as he chases a unique piece of history at Randpark Golf Club on Sunday.

Schaper is gunning to become the first amateur to win the SA Open since Denis Hutchinson in 1959, and at just three shots behind defending champion Louis Oosthuizen on 15-under, there is every chance for a monumental upset in the final round on Sunday.

“Being the only South African in the group was really cool; even if you don’t hit such a great shot they’re still cheering, and as an amateur I’m not used to that,” said Schaper, who played in the final match on Saturday with overnight leader Tapio Pulkkanen and Englisman Sam Horsfield. 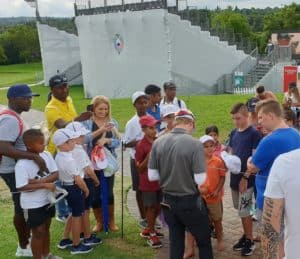 Jayden Schaper has earned himself quite a following at the 2020 SA Open hosted by City of Jo.urg at Randpark.

“It just feels special to have all the guys behind you. And the young kids who want autographs…not too long ago I was also always after signatures! It took some getting used to, but it’s a pleasure to be out there and have an opportunity like this.”

The 18-year-old began his round in what could have been deflating fashion as he carded a double bogey six at the tricky second hole.

However, the GolfRSA number 1 responded with an eagle at the par four fourth and a birdie at the par four sixth to move into red figures by the turn. Another birdie followed at the par five 14th, and a bogey-free homeward loop meant he kept his name right near the top of the leaderboard.

“Double bogeys hurt in this game and especially in a tournament like this,” he said.

“One mistake like that can make a big difference. Without that double I’d comfortably be sitting at 14-under. None of the par fives were really scoreable, except maybe 14. I felt 12-under would keep me in with a chance.”

Schaper, in fact, is being modest as a misbehaving putter cost him the chance at being level with Oosthuizen or possibly ahead.

On holes 11, 16, 17 he left birdie putts agonisingly short and had to settle for pars instead. And on 14, his birdie came from an eagle putt that singed the edge of a stubborn hole.

As for his strategy for the final round, Schaper said it would not change much.

“Whenever you push too hard for something, you tend to make mistakes. The goal is to come out like any other round and start chasing the guys in front of me. You don’t want to chase too many pins. Any putt can go in. You can hole a 30-footer or you can chip in. Guys ahead of you can start making mistakes. I’m just going to come out tomorrow and stick to my game plan and not attack stupid pins.

“I kind of had a feeling no one would get to 16, 17 or 18-under par. I just wanted to keep myself in it, I didn’t want to go back to 10 or nine-under because I wouldn’t really have a chance from there.”

Both players started the round on four-under, but at the end of play, Jarvis sat on three-under and Lamprecht had dropped to two-over.

Jarvis also made a battling start, but the country’s top junior rallied with birdies on 14 and 16 for a round of 72, while expensive double bogeys on eight and 16 saw Junior Presidents Cup player Lamprecht sign for 77.

Written by Michael Sherman and Lali Stander on behalf of GolfRSA.